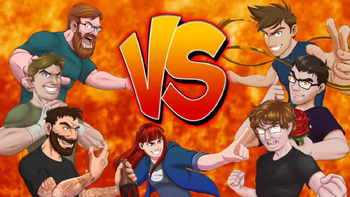 VS Episode 52 - Reset is the 52nd installment in Achievement Hunter's Versus series. In this Episode, the Achievement Hunters all participate in a go-kart race, to determine the new order of the contestants in Versus; first place competes against second place in Episode 53, the winner of that competes against third place in Episode 54, and so on. It is notable for being the only episode of Versus to have all seven participants challenging each other.

After the Achievement Hunters explain where they are and why, the first race begins. Jack emerges in first place, with "James" (Ryan) in second, Michael in third, Gavin in fourth, Lindsay in fifth, Ray in sixth and Geoff in seventh.

The second race began with a staggered start. In this round, Jack managed to stay in first for the entire round, even lapping some of the other competitors, emerging victorious. The results for the second race were almost the same as the first, but Ray managed to overtake Lindsay, placing fifth while Lindsay placed sixth.

The first round was to see who would be placed where for the staggered start, while the second and final round was to determine the line-up for future VS episodes.

Retrieved from "https://roosterteeth.fandom.com/wiki/Versus/Episodes/Episode_52_-_Reset?oldid=61510"
Community content is available under CC-BY-SA unless otherwise noted.