In a relationship with Barbara Dunkelman

Trevor Collins (born December 19, 1990 in Indianapolis, IN) is an Internet and YouTube personality best known for his work with the Machinima-affiliated production company Rooster Teeth, presently serving as the Managing/Supervising Producer, supervising manager and recurring secondary host of the popular YouTube channel Achievement Hunter, as well as the channel manager of LetsPlay Community channel. He was hired in October 2014 and officially started working full-time on November 17, 2014[2] after making community content for three years. His personal YouTube channel is Zed Direction.

Trevor formerly served as the Head Editor of Achievement Hunter from October/November 2014 until February 24, 2017. He presently serves as the Managing/Supervising Producer and supervising manager of Achievement Hunter, as well as a recurring secondary talent host/cast member, taking over Lindsay Jones's role as they stepped down.[3] Trevor is currently the boss in charge of AH in terms of setting schedules, the general direction and responsibility of AH content, business meetings and managing/overseeing AH employees day-to-day. Trevor also used to run an Achievement Hunter spin-off channel called Game Kids, which, as the name implies, was a let's play channel geared towards kids.

He is currently in a relationship with Barbara Dunkelman.[4] 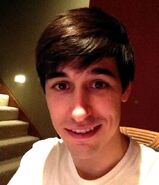