Shane Newville is a former employee of Rooster Teeth Productions. He was an animator on Red vs. Blue and later RWBY, until he was let go from the company in January 2016. He provided the voice of Russel Thrush and the Atlesian Knight-130s in RWBY (As well as an Atlas Soldier in the Volume 2 episode "Dance Dance Infiltration"), as well as Freckles in Red vs. Blue.

Shane has a personal YouTube Channel where he posts animations. He worked with Monty Oum for nearly 7 years, and was a co-animator for Red vs. Blue Season 10.

Along with being an animator, Shane worked as a sound engineer and electronica producer, with his music featured in his Soundcloud and an album called Formless. He was married to Katie Newville, who voices Emerald Sustrai in RWBY and C.C. in Red vs. Blue, with whom he had two children. 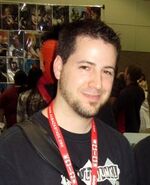