Sean Harvie Poole, best known by his internet pseudonym Spoole , is an American on-camera host, video game entertainer, self-employed Twitch.tv live-streamer, Internet and YouTube personality, and former actor, voice actor, and content producer. He is best known for his former work at Rooster Teeth's Funhaus, Machinima Inc's Inside Gaming and ETC, as well as Attack of the Show! from the G4 Media netowrk and NBCUniversal media in addition to his current occupation of live-streaming video games full-time on Twitch.tv. He resides near Seattle, Washington. As of January 2018, his Twitch channel boasts over 54,000 followers.and over 490,000 channel views, with the user being created on November 28, 2011.[1]

Sean has spent over 6 years of professional television and web video production experience, applying skills ranging from writing, producing, editing, animating, photoshopping and entertainment/tech journalism. He also has professional experience with Adobe Premiere and Photoshop as well as a basic understanding of After Effects. He has enjoyed live streaming on his personal Twitch channel for over 2 years. He regularly makes use of products like X-Split, Open Broadcast Software, Twitter and Discord to cultivate an ever-growing community.[2]

Spoole was born and raised in a small rural town in Washington state, near Seattle. After graduating from high school in 2004, he attended Cascadia College in Bothell, Washington from 2004 until graduating in 2007 with an Associate of Arts (A.A.) in Business Administration and Management, General. He then went on to study at Washington State University in Pullman, Washington from 2007 until graduating in 2009 with a bachelor's degree in Broadcast Management. His Activities and Societies (field of interest) included: Cable 8 (student television) - Producer / Director of award-winning film review show Always on the Movie. Spoole was a Broadcast Production Major and Business Minor.

On June 21, 2003, Spoole began his acting career. He played the character of Malachi in Half of Everything (Video short). He also served as a co-producer.

In May 2004 while still in college, Spoole joined Allied Telesis in Bothell, Washington, serving as an RMN Administrator until May 2006, two years later. Here, Spoole worked alongside Technical Support Representatives and government/corporate customers to approve returns of defective networking merchandise for resale or refurbishment. He managed their warehouse and made sure the department stuck to critical deadlines.

In May 2006, Spoole was promoted to Technical Support Representative of the same company (based in Bothell, WA), and served in this position until July 2007. His new job duties now included supporting customers who called in with defective networking products, guiding them to fix the issue or replace the product.

After being unemployed for a couple of years, Spoole joined G4 Media and NBCUniversal based in the Greater Los Angeles Area, working as a Production Associate for nearly two years from July 2009 until June 2011. He assisted in the production of daily live TV, wrote daily news segments for air and gathered assets for producers including capturing web videos to MinDV and XD Discs for ingesting into Avid. He also managed groups of interns.

In June 2011, Sean was promoted to being an Associate Producer of G4 and NBCUniversal. He served in this position for another year until departing the company in July 2012, while still living in L.A. He wrote and produced daily tech, gaming and entertainment related packages for air on G4TV's Attack of the Show, (writing and editing scripts, brainstorming ideas for future events on the show, and produced content for yearly live events including Comic-Con and E3, managed multiple nightly edits with a rotating team of editors.

The 1 episode he served as an associate producer on Attack of the Show! (TV Series) was dated 26 August 2011. Also during 3 episodes on AOTS from July 11, 2008, until the series finale in late January 2013, Spoole portrayed Ronnie Gayle's Glitter Man.

In November 2012, Spoole was hired by Machinima, based in West Hollywood, CA, to work on Inside Gaming and ETC as a Producer, Editor, and Co-host. There, he wrote, produced, hosted and edited daily entertainment news, live event coverage as well as comedy packages for the Machinima and MachinimaETC YouTube channels. He also produced and edited hour long gameplays into 10 minute let's play videos for the Inside Gaming YouTube channel. He also served as an Editor on ETC: Machinima (TV Series), acted as the character Handles in 1 episode of Inside Gaming Animated (TV Series) dated December 18, 2014. From January 25, 2015 to February 25, 2015, Spoole voiced himself in 10 episodes of Inside Gaming Animated (TV Series). Also, on December 31, 2012, he starred in an advert as the character Georgia Tech Yellow Jackets Punter in 2012 Hyundai Sun Bowl (TV Movie)

On February 5, 2015, Spoole, along with the other first-generation OG Inside Gaming Cast members (Adam Kovic, Bruce Greene, James Willems, Lawrence Sonntag, Matt Peake and Joel Rubin) left Machinima and created Rooster Teeth's newest gaming channel brand, called "Funhaus", based in the Greater Los Angeles Area. This channel would be known as RT's West Coast division. The channel became active on February 16, 2015 after gaining 100k subscribers within 12 hours of their first introductory video being posted. On the channel, Spoole served as an editor, content producer, co-host and recurring secondary host. He would produce, edit, co-host and occasionally provide on screen talent for video game let's play packages on the Funhaus YouTube channel, ranging from gameplays, podcasts, fanQ&As, as well as live action sketch comedy and voice acting characters in animated cartoons. The team would also review games and technology products in a retrospective and comedic manner. Daily used of key frame animating, quick cuts, applying masks and adding sound effects to enhance game play videos. Spoole also oversaw the live production of the channel's live game streams on both the Twitch and YouTube platforms.

On February 8, 2016, shortly after 1 full year of employment, Spoole announced his departure to pursue his passion and do something different for a change. He left on February 12, jetting back home to Washington state near Seattle, from L.A. the next day.

Following his departure, Spoole began live streaming more often on Twitch as a big side project while hunting for a new job back home in Washington state near Seattle as of March 2016. Initially, he had no intentions of live-streaming full-time, but due to his Twitch channel's growth and popularization, he began to stream more often over time to a point at which he live streams gameplays 5 days a week like most full-time Twitch streamers. As of 2017, Spoole uses content creation using the Twitch and YouTube platforms, usually video gameplays. He now streams 5 days a week (essentially full-time) while still being open to a new job, and managing business partnerships and social media, web page building, selling merchandise, being affiliated with greenman gaming, as well as editing and posting his streams for YouTube all while growing a welcoming community. 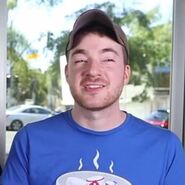