In 2006, Rooster Teeth Productions formed its own webcomic series, Rooster Teeth Comics. The strip satirized the staff members in their regular daily lives, although often pushing each member's personality to the extreme for comedic effect. The humorous situations often related to real life events in the lives of the staff, or other widely recognized current events. It was drawn by Luke McKay, a member of the Rooster Teeth community, and written by Griffon Ramsey, the wife of Geoff Ramsey. In 2011, the choice was made to end the comic, in light of Griffon leaving her full-time position at the company.[1] The comics were released three times a week, on Tuesdays, Thursdays, and Saturdays. All five years of the comic have been released in separate collected edition books, though these are now only available digitally through iTunes.

Luke is still an active member of the Rooster Teeth community, and drew a new RT Comic in September 2016 as part of a livestream.[2] To celebrate buying his own printing equipment, Luke made a special reprint of the comics that were available at RTX 2017. 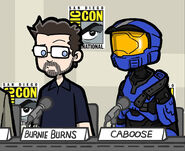 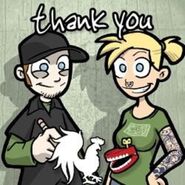 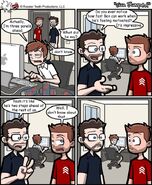 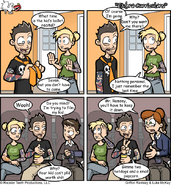 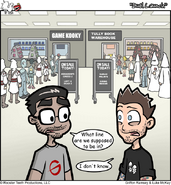