RWBY Chibi is an animated show wherein the cast of RWBY takes part in comedic skits while portrayed in chibi form. It debuted as a part of Rooster Teeth's Summer of Animation on May 7, 2016. Season 2 premiered the following year. While it always debuts in the hiatus between RWBY seasons, Season 3 marked the first where Chibi started right as the volume ended, in January 2018, albeit with a mid-season break from March to June. Season 4 is set to debut in May 2021 as part of Neon Konbini.

“Join the cast of RWBY in a new series of cute, comedy shorts with infinite possibilities! It's playing tag! It's baking cookies! It's posing as police officers! It's... really quite absurd. It's RWBY CHIBI!”
— Show description on roosterteeth.com 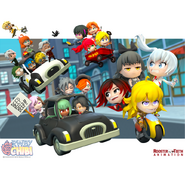 Poster with the cast prior to Season 3.