Animator on gen:LOCK
Animator and director on RWBY and RWBY Chibi
Director on Nomad of Nowhere

Paula J. Decanini is an animator and director at Rooster Teeth Productions.

A Kentucky native, Paula graduated in the University of Louisville in 2004 and afterwards got a computer animation diploma at the Vancouver Institute of Media Arts in 2007. She jumped around companies working as an animator, including two Austin ones, gaming developer Edge of Reality (where she worked in the expansion pack The Sims 3: Pets) and studio Spiderwood Animation Productions.

Paula joined Rooster Teeth in 2015, and her first credit is the RWBY episode "Fall". By the following volume, she was one of the lead animators. Still, her biggest contribution turned out to be in spinoff RWBY Chibi, where she worked in half of the first season's episodes, was a lead animator in the next one while also directing a few segments, and by season 3 was the main director, aside from the occasional Kerry Shawcross segment. Afterwards she returned to RWBY and became one of the lead animators, while also starting to direct episodes. 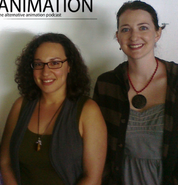 Paula Decanini (left) at the RWBY Chibi panel at RTX 2018
Community content is available under CC-BY-SA unless otherwise noted.