The Rooster Teeth Wiki
Register
Don't have an account?
Sign In
Advertisement
in: RWBY Crew, Animator, Red vs. Blue Crew,
and 8 more

Monyreak "Monty" Oum was an independent graphic artist in Texas. He is best known for his computer generated imagery (CGI) work. Monty was one of the primary animators for seasons 8-10 of Red vs Blue and was the creator, editor, producer, and animator of RWBY. He was married to Sheena Duquette on May 10, 2014. He died on February 1, 2015

After rising to fame with the video game inspired animated shorts Haloid and Dead Fantasy (the former of which became the most watched user-created content on GameTrailers), Monty worked with Namco Bandai on the game Afro Samurai, but felt frustrated in the game industry. He then met Burnie Burns in a convention, and being a long time fan of Red vs. Blue, accepted his invitation to do some animation for said series.

During production of season 10 of Red vs. Blue, Monty pitched to Burnie an idea he had for an anime-like series, which Burnie said Monty could do if RvB was finished on scheduled. Said project was RWBY, where Oum was a director and co-writer (working on the scripts with Miles and Kerry), and voiced the character Lie Ren.

According to Rooster Teeth staff, "Monty is like a machine. He's awake to work and to animate and to do stuff, and when he's not – just powers down – he literally goes into sleep mode."[2] Oum agreed, stating "It's easy to forget to sleep when you're working on something cool, so you just work as hard as you can and, still, there's never enough time, so the thing you gotta learn to do is essentially let go."[3]

Oum was born in Providence, Rhode Island in 1981. According to Oum, he was "Cambodian, Vietnamese, Chinese, and Japanese." Oum married Sheena Duquette on May 10, 2014. He had four older brothers and two older sisters.

On January 30, 2015, Burnie Burns announced on the Rooster Teeth website that Oum had been hospitalized with an undisclosed medical emergency, and that he was in critical condition.[4] Monty Oum passed away at age 33 on February 1, 2015 after having suffered "a severe allergic reaction during a simple medical procedure" that left him comatose and unable to recover.[5][6] He is survived by his wife, Sheena.

In response to Oum's death, fans were asked to simply do something creative in lieu of flowers and gifts. Alternatively, a crowdfunded fundraiser was set up to pay for Oums medical bills and support his wife in her time of need; the fundraiser raised over $240,000.[7] A memorial podcast was released on February 2, in which Burnie Burns, Matt Hullum, Gus Sorola, and Gray Haddock shared stories and anecdotes in remembrance of Oum. A short tribute segment from the podcast was uploaded two days later. Production studio, RocketJump—famous for Video Game High School—created a tribute to Monty titled "Keep Off the Grass". Monty's character in RWBY, Lie Ren, got recast with his brother, Neath Oum. 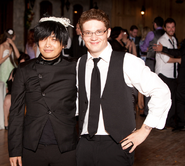 Monty at Michael Jones' wedding after he caught the garter 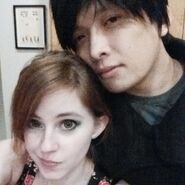 Monty with his wife Sheena

Monty and Sheena the day before they got married. 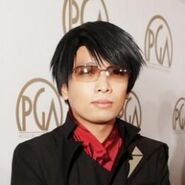 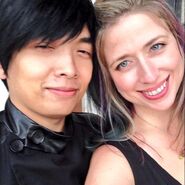