Matthew Bragg, also known as AxialMatt, is a Rooster Teeth employee and a staff crew member of Achievement Hunter, who gained popularity by making videos for Community Hunter. He was officially hired on July 6, 2014 at Achievement Hunter's RTX Panel at the third day of RTX 2014 - alongside Jeremy Dooley - as an editor, content creator and recurring secondary host. Matt still serves as a content creator, editor, recurring host and Minecraft Builder at Achievement Hunter, mostly editing AH videos and Lets Plays as well as starring in several of them. Occasionally, he shows up in some other Rooster Teeth videos and content (such as Rooster Teeth Animated Adventures, On The Spot, Off Topic Podcast, RT Podcasts, etc.).

In addition to his Achievement Hunter videos and series, he's known for creating maps used in episodes of Let's Play Minecraft and Fore Honor, the latter known for being extremely tough.

While growing up in Aiken, Matt worked part-time at his family's heating and air conditioning business store in South Carolina at the age of 14 until he was 15 years old. He also had worked at a small PC repair business.

In 2008, he graduated from South Aiken High School at the age of 18. He later graduated from Aiken Technical College in 2010 with a degree in computer engineering.

When questioned regarding the origins of his Nickname, "AxialMatt", Matt claimed that the word "Axial" was "honestly just something really dumb that he randomly thought up of while in high school". He later learned that it had an actual meaning related to electricity and electric circuitry/circuit boards. However, he still kept his nickname and he has been using it ever since.

Prior to working at Achievement Hunter and Rooster Teeth, he first gained popularity for his series of videos titled MegaCraft. It gained such popularity that it was eventually moved from Community Hunter to the main Achievement Hunter channel. He's also grown incredibly popular on social media with more than 119K followers (As of July 2020) on his personal Twitter account @Axialmatt. He is also notable for being the creator of various maps used in some early episodes of Let's Play Minecraft, including Mineball, Grifball and Achievement Raceway. He has worked with fellow Achievement Hunter content creator and host Jeremy Dooley. 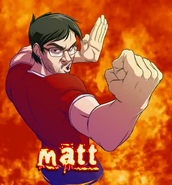