Lindsay Elise Jones (née Tuggey) is a Rooster Teeth employee, and former manager of Achievement Hunter. They primarily edit Achievement Hunter videos, but also occasionally stars in them. Lindsay was also a member of the Internet Box Podcast, before its conclusion. Lindsay co-created and directed the series X-Ray and Vav, based on AH, alongside Jordan Cwierz, and has voice roles in various RT shows.

On May 9, 2014, Lindsay married fellow Achievement Hunter and Rooster Teeth employee Michael Jones. They also used to be a varsity volleyball player back in their high school days.

Lindsay also revealed on the Rooster Teeth Podcast that they once burned down a Frat House kitchen on their first visit there.

On November 12, 2016 during the Extra Life livestream, Lindsay announced that they were pregnant with Michael's baby.

In December 2020, Lindsay changed the pronouns in their social media bios to "They/Them", coming out as non-binary. Lindsay stated they still accept being called she/her, but prefer neutral pronouns from the community.[4]

Lindsay appeared on the Rooster Teeth Podcast several times and host the RT Recap on occasion. They participated in the second Achievement HORSE tournament, but lost to Gus in the first round. Lindsay has also appeared in various Let's Plays. They created the idea, and built the maps, of Let's Play Minecraft episodes Creeper Soccer and Buckingham Palace

Lindsay also took over Let's Builds along with fellow Achievement Hunter members Kdin Jenzen, Matt Bragg, and Jeremy Dooley. They have also appeared in some Let's Play Grand Theft Auto V episodes, as well as some Things To Do In... videos. In Versus Episode 49, Lindsay joined the rotation of contestants.

In April 2016, Lindsay was promoted to the Managing/Supervising Producer, general manager and head of AH. They were Geoff's successor as the head of Achievement Hunter management, taking over Geoff's behind the scenes managerial and directorial superintendent duties of Achievement Hunter, with Geoff focusing more towards the Let's Play family multi-channel network. However, they stepped down in February 2017 due to pregnancy, handing over the "boss" duties of AH to Trevor, and has since then begun to appear more on-camera, on-screen, and on-mic in AH shows, videos, and content.

They have appeared on On The Spot with Meg Turney and Michael Jones.

In the Rooster Teeth series RWBY, Lindsay voices Ruby Rose. They also voiced Vanessa Kimball in Red vs Blue (where they were also Female Simmons in Season 14 and had minor roles in Season 16), Hilda in X-Ray and Vav, Space Kid in Camp Camp, and Razzle in gen:LOCK. 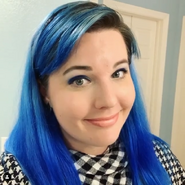 Lindsay with a Ruby Funko Pop 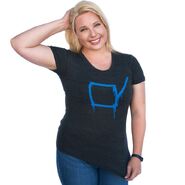 Michael and Lindsay at RTX 2012

Lindsay in their wedding dress

Lindsay and Ray at Lindsay's and Michael's wedding

Lindsay at their wedding

Lindsay and Michael at their wedding

Lindsay and Michael at their wedding 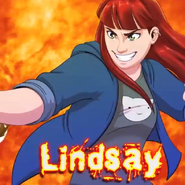 Lindsay dressed as their character Ruby Rose from RWBY 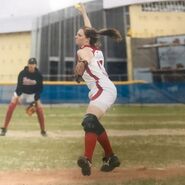 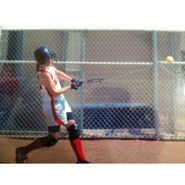