< Let's Play Minecraft‎ | episode listing
View source
watch 01:36
We're Getting Mutants in the MCU - The Loop
Do you like this video?
Play Sound 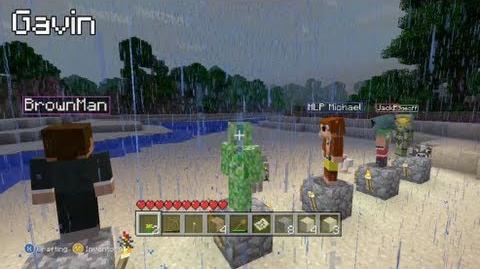 "Can we fire him? (Gavin) We have mater-- we have tape of him saying things like that." ~ Jack

The episode starts with the lads revealing their new player skins. A Creeper blows up the set, forcing them to reload the map. When the competition finally starts, Ray gets killed by a Skeleton, then hides in a tree, calling it "Fort Ray." Gavin does a dig-down and hits Bedrock quickly, while Jack, Michael, and Geoff mine in their own areas. Ray decides to mess with Geoff and ends up stealing his iron ingots. Geoff decides to take it out of Ray's paycheck.

Ray talks about his parents, while Michael and Gavin reminisce about their favorite movies. Ray lags out of the game shortly afterward. Michael finds Geoff's mine and explores, but Geoff's torches aren't lit on Michael's screen. Gavin gets killed by the monsters outside his mine, as Michael takes Geoff's torches and re-mounts them on the wall, causing Geoff to frantically search for him.

Geoff explains to Michael how the world works, while Michael threatens to let lava loose. Gavin manages to place a gold block on his podium, while Jack gets killed by a Zombie. Geoff places a gold block shortly after. When the others discover Gavin's gold block, Michael starts attacking Gavin aggressively. Jack joins in the fight, but is killed by Gavin. As Michael and Gavin fight, Jack then goes to Geoff's mine and tries to kill him, but is slain with a sword. Michael eventually kills Gavin and claims all of his stuff. The episode ends with Gavin and Michael talking about chipping their teeth sneezing.

This was the first episode where the Achievement Hunters began using their regular player skins. Before this episode, Ray was the only person who had been using his current skin. The others chose skins from Skin Pack 1, which had been released four days this episode was posted. After this episode, Ray became the only person who regularly uses one of the default skins from Minecraft Xbox 360 Edition, until Ryan began using the Scottish Steve skin in Mounted Combat.