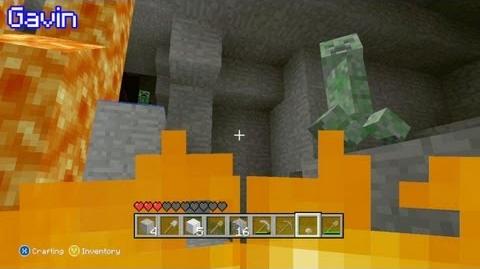 "I'm gonna jump this lava like an absolute mofe!" ~ Gavin

The episode begins with Geoff immediately starting the competition, and everyone rushes towards a place to dig. Ray  immediately goes to kill Geoff. Eventually, they all convene in the cave that they spawned in the last episode, with Ray trying to kill Geoff yet again. Gavin attempts to show off by jumping a lava flow, but hits his head against the ceiling and falls into the lava. As Geoff goes towards an island, Gavin is quickly slain by a zombie. Upon respawning, Gavin experiences some lag in the map loading process, and creates the word "aneurisming". Michael then reclaims Gavin's map, as Gavin tries to explore the overworld, talking about Bear Grylls. Michael eventually falls after digging, scaring him. Geoff and Gavin then discuss and joke about colors of diamonds. The four players continue digging and making tools. Gavin eventually dies again and loses his materials. Eventually, an unknown player called "i COBRAxGuNneRz" crashes the recording, which makes Geoff realize he forgot to set the world to invite only.

After changing the settings, Gavin starts rambling about measurements, and eventually falls into lava, and dies soon after respawning. Gavin then respawns in a resource rich area with nothing to mine it, and falls into lava again. The four then go into small talk. Eventually, it is shown that Michael now is able to build stuff in Minecraft and speeds up in progress, but gets lost in his mine. Geoff discovers gold. Ray abruptly announces he won.

Although this episode was filmed immediately after Race to Bedrock!, the members of Team Lads traded skins for this episode. Only Geoff continued to use the same skin that he had in the previous episode.