< Let's Play Minecraft‎ | episode listing
View source
watch 01:36
We're Getting Mutants in the MCU - The Loop
Do you like this video?
Play Sound

“It's like the ghost of Ray walking around.”
— Michael

The episode opens with Geoff trying to explain the competition to the others, but he constantly gets interrupted by Jack's and Gavin's complaints about who's podium is who's, with Michael and Ray being the only to identifiable blocks. Gavin decides to explain the competition, and says the first two people to go are the people who can spawn a chicken from throwing eggs, which ends up being him and Ray. However, Ryan decides to reset everyone's health and food bars by killing them. This leads to Michael respawning in the middle of nowhere due to an obstructed bed. Both of them proceed to the arena where Ray promptly beats Gavin, and wins two apples from his chest. Ray then faces off against Jack, whom he also beats, and gets 16 snowballs as a result. Ray's luck dwindles when facing Geoff, as Ray isn't at full health, and loses.

Geoff obtains a Potion of Instant Damage from the fight, which he tries to use against Michael, but ends up drinking it himself. Michael then obtains two cobwebs, and proceeds to fight Gavin. Michael manages to fake Gavin out by throwing his potion of harming at him and sneaking around to kill him. Michael obtains bread, then heads to the arena to fight Ray. In the fight he lays down two cobwebs, which Ray soon gets stuck in. However, both of them kill each other, so no one wins. Geoff and Jack then face off.  However, Michael is distracted by a second Ray in the world, with the same name and skin, a fact that Ray, Ryan, and Gavin also pick up on. While the four were distracted, Geoff was knocked out of the ring. Gavin tries to fight Jack, but is distracted by the Ghost Ray. However, Jack hit the wrong button, letting Gavin win. His prize is an empty chest. Ray then promptly beats Gavin, and finds the first gold block. Gavin then goes off to play with Ghost Ray, while Geoff beats Ray and gets Flynt Coal.

Michael storms the arena and beats Geoff, but gets nothing in return, and fights Gavin, who wasn't aware that the fight has started. However, despite the early lead by Michael, Gavin manages to land himself in the cobwebs and beat him, shocking everyone. They speculate that the cobwebs provide some sort of combat enhancement. For his efforts, Gavin won a piece of the tower, but is beaten by Ray afterwards. To the other competitor's dismay, Ray finds a wooden sword. Using it, Ray quickly takes care of Jack, Geoff, Michael, and Gavin, also obtaining another gold block. Geoff manages to break Ray's winning streak by killing him, but he goes down as well. Michael then beats Gavin. Ray soon re-enters the ring and beats Michael, claiming iron boots. After beating Jack, Ray is left with almost no health and no regenerative abilities, which gives Geoff an easy win. Geoff obtains a gold chest plate, which he uses to defend himself against all but Ray. Ray faces Jack, but loses. Gavin explains a glitch in which he could see the fight, but Ray was out of the ring on his screen and it looked like he was fighting Ghost Ray. Jack wins a piece of gravel, but then loses to Geoff.

Geoff obtains his piece of the tower and quickly erects it. Michael then beats Geoff and puts himself on the board with a gold block. Michael then beats Gavin and received a cobweb. Ray beats Michael, but can't beat Jack do to a glitch making him invincible. The glitch is discovered in Jack's fight with Geoff, so everyone leaves and rejoins, and the fight between him and Geoff is restarted. Geoff beats Jack, but is defeated by Michael. Michael, to everyone's shock, obtains a stone sword, which he uses to defeat a distracted Gavin. In the ensuing fights, Michael obtains two more gold blocks. In his last fight with Ray, he beats him and obtains the final piece of the Tower of Pimps, claiming victory.

Ghost Ray is the product of a glitch that occurred in Episode 43. Ghost Ray is described as having the exact name and skin as Ray, but when Ray checks the players online, there is only one BrownMan. It was discovered by Michael after he and Ray both killed each other at the same time. However, Michael, Gavin, and Ryan are the only ones who can see it.

Throughout the episode, it seems to fly around everywhere like Geoff and walk in random directions. It is unknown whether or not it was an actual being or a glitch. In the comments, people think it is Herobrine disguised as Ray (referred to as He-ray-brine). Caleb is also theorized to be Ghost Ray, as he logged on early in the video but was not officially present. It was last seen when Ray "killed it" while on Gavin's screen, which shows that while Ray was fighting Jack in the arena, he can see Ray hitting "Ghost Ray" in the Spectators' Area.

Ghost Ray made another appearance in Episode 46, along with a brief appearance by Ghost Ryan. In this appearance, Ghost Ray stood on top of Ray's bed looking down the entire time, leading Jack to think he was feeling sad. Ghost Ray's initial appearance inspired a clue in Episode 100 and his name was included into the credits of the very same episode.

Back in Achievement City, everyone basks at how Michael gets to keep the Tower for the second week in a row. As all of the other Achievement Hunters shower Michael with various objects, Gavin sets fire to Michael's house. The rest soon notice the damage and try to contain it, as Ray sneaks off and activates Plan G, destroying Achievement City. 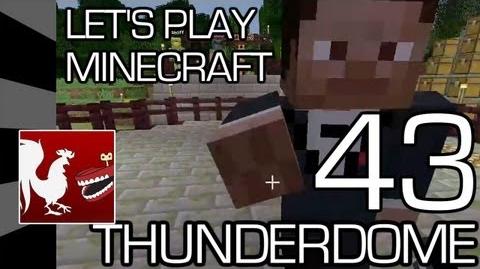