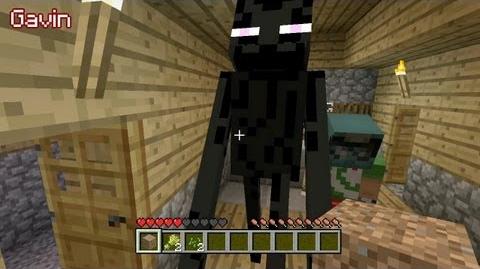 The lads spawn at night in a new world near a village. They get rid of their maps, and a Creeper explodes nearby. They try to kill Endermen, but they keep teleporting away. They then run for the village, where the fight off a few remaining monsters as dawn breaks. Michael is slain by an Enderman and has to run back to the village.  Geoff is also killed by an Enderman moments later.

As they explore the village more, Creepers arrive and blow up the farm. Geoff goes down a well, seeing how far down it goes. Michael hands Gavin wood and dirt blocks, and Gavin seals up the well. Geoff drowns to death in the well. Gavin clears the wood away, but falls in. Michael tries to drown him like Gavin drowned Geoff, but Gavin escapes. Michael chases Gavin across the world and gets lost when Gavin falls over a cliff and dies. Ray jokes they have a pet Enderman living in the house of dirt, and Geoff kills Gavin in revenge for killing him at the well. Eventually, Gavin suggests they go on a stronghold search, and Michael hits a wolf and is killed, respawning him near the village. Geoff brings the idea of finding a stronghold back up, and during the night some Creepers come up and begin destroying the village again. Eventually they agree on going on a "Lord of the Rings quest" to look for a stronghold, and Jack begins to mine while the rest look for sheep to make beds. Gavin finds another village, which he calls Slo-Moville. Geoff suggests calling it Danville, and Ray suggests having Village Wars.

Jack, in his mine, digs down a block and falls into a ravine. Gavin finds Jack's mine and steals his furnace and crafting table. Geoff digs down in Jack's house (which has since been called a mine) and eventually finds iron. Michael joins him and they make the mine bigger. Jack, while not paying attention, starves to death. Gavin makes his way into a ravine, and Ray watches from above before falling to his death in the ravine. Geoff finds himself in a cave, and is almost killed by falling gravel (which he calls sand). He then starves to death as well.

While in Slo-Moville, Michael and Gavin come across a Spider Jockey, which they kill. Jack jumps off a cliff and dies in lieu of starving. He then finds sheep, and Gavin finds another flock elsewhere. Eventually, Jack decides to drop out of the game and leaves. Geoff and Michael decide to burn Slo-Moville down, and Gavin finds a huge cave filled with water and lava. Ray claims a ravine in his name, while Gavin falls in lava and dies. Geoff and Michael get lost trying to find Gavin's village while Gavin deals with some Creepers in his village. Michael and Geoff finally find Slo-Moville, and Michael distracts Gavin while Geoff places lava on his roof. Geoff and Michael keep killing Gavin as he tries to first put the fires out, then kill them.

As the episode ends, Gavin runs from Geoff and Michael, but doesn't pay attention and runs into a cactus, losing most of his health and allowing Geoff to catch up and kill him. Part one of the episode ends there.