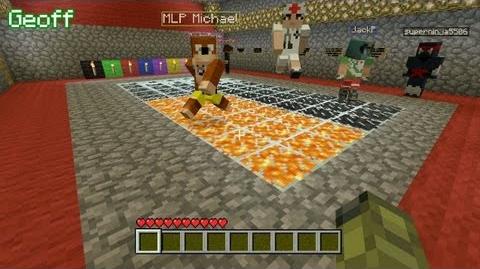 "Everyone is looking for a dick in here." ~ Michael

The episode begins with Ray shouting "Let's Play!" The lads are in a starting room, and Geoff reads the rules. They grab their items, wait for Jack (who was kicked from the server on accident) and begin.

Ray goes through the door without the Creepers nearby and runs into a couple skeletons. Geoff and Michael go through another door together, and Michael wonders why they split up when they're allowed to work together. Gavin runs out of torches almost immediately. Ray walks around a corner into a Creeper, which kills him. Geoff fights off a zombie, and he and Michael find a platform with cake. Jack is killed by a zombie as Gavin, who is near Ray, fights off a skeleton. Ray, however, is killed again by a Creeper, and Gavin falls into water and can't get out.

Geoff finds an iron sword and goes to help Michael, who is lost. Ray and Gavin meet up again and fight off a skeleton. Michael and Geoff discover there are booby traps on the cake, and Geoff is low on health. Gavin and Ray fight off a Creeper around a block of wool, which Ray mistakes for a chest. He dies in a Creeper explosion, and Gavin finds a trapdoor that leads to a checkpoint. He waits for Ray, though, and Geoff, who finds him around a corner, kills him. Ray comes back and Gavin meets up with him again, but Ray is killed again by a Creeper when he falls into a water trap. Geoff, Gavin, and Michael run into Creepers. Geoff kills Gavin again, and Jack and Ray end up together but stay friendly and go separate ways.

Gavin is killed by a Creeper as Ray comes up behind Michael and kills him. Ray then goes into the cake room and destroys all the cake. Geoff runs into Gavin and kills him. Geoff runs into Jack, who has leather armor, but is killed. Ray finds a chest, but it is blocked by lava. Michael is right behind him, and the lag takes a second to light him on fire and kills him. Jack ends up backtracking to the start, and Ray finds the checkpoint. Gavin finds the beginning as well, and he and Jack dance around each other while Jack threatens to kill Gavin. Ray, who fell into water, is killed by a zombie. Jack runs into a Creeper while Michael fights off a spider. Jack runs into another Creeper, which he barely manages to survive, only to be killed by another one behind him. Geoff finds the beginning and is killed by Gavin.

Jack manages to find the room that Caleb is in, but becomes trapped. Caleb fills it with lava, which kills Jack. He and Ray meet up in the spawn, but decide not to work together. Gavin steps into lava and is killed. Geoff finds a chest with a bow and arrow in it as Jack and Michael, who is following him, go past the room full of lava. Ray ends up near Caleb and walks out of the maze. He finds the chest with the five pieces of the Tower of Pimps in it, and since everyone else is still in the maze, puts it up with no interference as Caleb watches.

Ray stands on top of his Tower of Pimps looking over the top of the maze before he flips to third person and presses the crouch button repeatedly. As they talk about their experiences, Ray begins to jump up and down on the Tower. SuperNinja5506 makes a cobblestone tower behind him and jumps up and down in celebration as well.