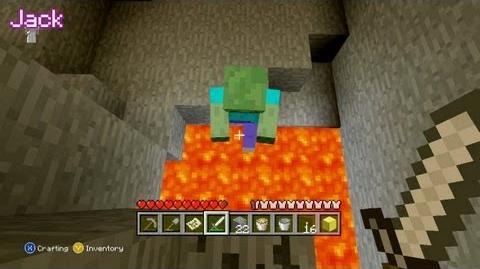 The episode begins with Geoff explaining that he and Gavin took everyone's controllers and scattered their players to the four corners of the map (except Geoff, who is at the far right side). Gavin and Geoff explain the rules and the game begins.

Immediately, the players begin to punch blocks of wood. Geoff tells them that if their piece of the Tower of Pimps is destroyed, they will replace it immediately and restart the game. Michael makes a boat while Ray makes his way over the Wipeout course. Jack and Geoff begin mining, and Gavin realizes that he's simply running around doing nothing.

Michael comes across Gavin and makes the first kill, taking Gavin out. Gavin respawns near Achievement City and takes the stilts from Jack's house. Meanwhile, Michael runs across a spider, but gets rid of it and kills a pig. He then falls into a hole and is blown up by a Creeper. While he looks for his stuff, Gavin kills two Creepers while also trying to figure out where Michael was. Geoff, Jack, and Ray are still mining, and Geoff fights off a spider in a cave.

Since no one found where Michael was killed, Gavin puts two gold blocks where Michael started, forgetting that Michael has nothing to mine them with. Meanwhile, Jack works on getting wood from a tree and makes more tools, Gavin goes into Achievement City to get supplies (breaking the rules yet again), and Geoff runs away from a Creeper in his cave. He runs into another one, managing to avoid it.  Gavin is killed by a zombie near Achievement City. Geoff, while mining some coal, uncovers lava and is killed.  He goes to get a new block of obsidian.

Geoff suggests the lads just take the battle to the base of the Altar of Pimps, but the plan is vetoed by Jack, Michael, and Ray, who have good mines going. Michael mines for iron to make a sword while Ray pulls the lever to spell FART in the ground. Gavin throws a block of gold at Geoff, only to be hit by him. Gavin realizes there's a Creeper, which explodes a bit further over and kills Geoff. Gavin tries to take the block from Geoff, but it is destroyed. Gavin is standing in Achievement City when a creeper walked up behind him and killed him causing Plan G to go off.

Michael challenges the rest to fight him, and they ask what he has if they kill him. Michael admits that he has nothing, but does not have a map to find his two gold blocks back where he started. Jack points him in the right direction to retrieve them, but Geoff is also going after them. Michael crosses the Altar of Pimps as Ray also heads to the two gold blocks. Ray gets to them first and mines them, making it so he has three gold blocks causing the others to target him.

Night falls and Michael, who is swimming, is followed by a spider. Ray narrowly avoids a Creeper explosion. As Ray stands on the Altar of Pimps looking at his map, he is hit by a zombie. Michael wants to know where Ray is, Geoff fights off a Creeper, and Gavin asks Ray not to follow him up the Altar, which Ray follows only long enough to set his spawn point on the Altar. Ray kills him and takes the obsidian block. He respawns near Jack, who kills him again while not realizing that Ray just killed him. Jack and Ray are the only two who have any blocks from the Tower of Pimps.

Michael asks Jack if he's headed toward the Altar, but Jack is busy fighting Ray. He puts down a block of lava, but Ray kills him anyway. Gavin comes up and tries to hit Ray as Geoff cheers him on, but Ray kills him and heads up the Altar. Michael and Geoff have trouble finding the Altar despite its size. Ray avoids the skeleton at the top and places all five blocks, winning the game.

Geoff then reveals that they are going to do something else: a Bonus Round. In this round, everyone is at the bottom of the Altar with one block each, and fight to get all the blocks. They start off with Jack sleeping to set a spawn and Ray suggesting they wait until daylight, but they just begin without waiting.

Ray decides that he's going to go off and let the others find him, while Gavin, Michael, and Geoff head for the top of the Altar. Michael's screen shows Geoff chasing Gavin as he watches. Jack and Ray join the fray, and Ray kills Michael. Jack kills Geoff and Gavin goes after Jack. Ray comes up behind Gavin and hits him, but goes after Jack when Gavin drops down. Gavin and Ray fight each other, but Gavin is killed and runs into Michael when he respawns. Ray heads up the Altar while Geoff stands at the top waiting for him. Geoff is easily killed, and Ray wins again.

Geoff says that he thinks the game is fun and declares another bonus round, the Bonus Bonus Round. The lads all sleep in beds to set their spawns near the Altar and make it daytime. Michael joins the game after everyone set their spawns, but he couldn't sleep in a bed since it was day time, leaving him without spawning close to the Altar. Gavin yells go, and the lads run up the Altar. Jack and Geoff go after Gavin, and Michael and Ray battle each other for their blocks. Michael dies when Ray kills him, and Gavin is killed by Ray shortly after. Gavin makes it back up and grabs his sword, killing Ray. Jack goes after Gavin, and Geoff follows Jack thinking he has the blocks, killing him. Ray has a sword and everyone converges on Gavin.

Geoff ends up with all five blocks, and the lads chase him up the Altar. Jack is right behind him, but Gavin knocks Geoff off the start of the Tower (the obsidian block and a gold block), and they go after Geoff. Ray dies after falling down hard, but Gavin manages to kill Geoff and get the last three blocks. Ray tries to hit him with boots as Geoff makes his way up the Altar again. Ray kills him near the top of the Altar, but Jack and Michael go after him. Geoff starts hitting Jack, distracting him and giving Ray enough time to get back to the top. He can't reach, giving the others enough time to force him back down the Altar.

Jack kills Ray, and Gavin tries to hit Jack with boots. Geoff places a couple dirt blocks, allowing a way to get up to the top of the Tower. Michael kills Gavin, thinking he has the blocks, and kills Jack moments later. He then kills Ray when Ray tries to go after the gold. Geoff kills Ray while Michael goes for a dirt block. Michael kills Ray, and Geoff asks who has the rest of the Tower while Michael places his dirt block. He still can't reach, but places a gold block to make the Tower half complete. Jack kills Michael when he goes for the other dirt block. Geoff takes the dirt block as Jack gets the gold. Jack is killed, and Gavin finds the gold on the side of the Altar. He places a block on the side of the Tower before being killed by Geoff. Michael complains that now they can't do anything but Jack remembers that he had a diamond pickaxe, but no one knows where it is. Ray has it and everyone goes after him.

Ray throws it and Jack gets it, mining the incorrectly placed gold block. Michael hits him as he mines, and ends up with the gold block only to be killed by Jack, Gavin gets the gold, and Jack kills him only for Ray to take the gold. Jack kills him and gets the gold, some dirt, and plenty of armor. Ray takes the two dirt blocks already at the top and Jack wonders who has the other block of gold as he places his block. Michael realizes that Geoff must have it, and he and Ray go after Geoff as Jack watches from the top of his Three-Quarters Tower. Ray kills Geoff and takes the block of gold. Gavin, who has armor and a sword, swings at Ray. Ray gives him the gold block, and Gavin heads up the Altar. Ray tries to hit him in the back, but Gavin kills him. Jack, with his diamond sword, goes after Gavin and kills him. Ray ends up with the gold as Jack didn't get it, but no one else knows he has it. They all go after each other, leaving Ray a clear path to the top. He throws it, and Jack gets it. Jack kills Ray as the rest go after Jack.

Gavin gets the block when Jack dies, but can do nothing as he doesn't have dirt. Jack pulls out the dirt but dies. Gavin throws the dirt and Ray takes it. Geoff swings the diamond pickaxe around, killing Ray. Ray ends up with the gold and dirt again, and heads to the top as the rest of the lads guard the Tower. Jack gets the block when Ray throws it. Ray has the sword though, and comes back to kill everyone and take the gold and the dirt. He makes his way up the Altar and wins the game.

First Round: Ray jumps up and down on his Tower of Pimps, but is shot off by the skeleton, which he kills.

Bonus Round: Ray, again, jumps up and down on his Tower of Pimps as Geoff declares a Bonus Bonus Round.

Bonus Bonus Round: Ray places the final block, but is knocked off the dirt by Geoff. He runs around the Tower of Pimps, though, in celebration.