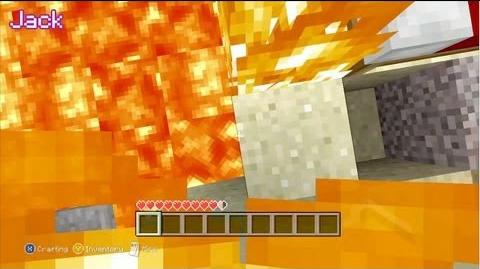 "All you had to do was stack the odds incredibly in your favor." ~ Michael

The episode begins with Gavin's death as he falls into the water. Ray, Michael, and Jack are still mining as Gavin looks for his stuff in the water. Ray suggests that they make a flint and steel and try lighting Geoff on fire, forcing him to jump off. Geoff shoots that idea down as he has water in his wooden chest.

Gavin tries another run up his Staircase of Ascendance, but Geoff shoots him off. He makes a second try, but is hit with an arrow and sent into the lava, losing all his gear. He continues to make attempts while the others mine. As he's mining, gravel falls on Michael. Gavin gathers dirt, but meets a Creeper and narrowly escapes. Jack recommends that someone go and put lava around Geoff's podium, but the idea is abandoned.

Michael's screen reveals that he has hit bedrock, the farthest point away from Geoff vertically. Gavin makes it back up and gets his sword, but is hit by lava when he hacks a block from Geoff's fortress. Geoff finishes him off with an arrow. Michael finds water underground as the respawned Gavin and Ray launch another attack at the fortress.

Gavin goes to walk up his staircase, but finds that lava has covered it. Ray gets into Gavin's abandoned boat until the tower has loaded, then gets out and makes another tower. Jack comes out to help, as does Michael, and Gavin fixes his staircase. Michael realizes that he has no iron tools, meaning that he couldn't get the Tower anyway. Geoff begins making an outcropping for a better vantage point. Michael makes it to the top of Gavin's staircase, but is killed in one hit by Geoff's arrow. Geoff gives the rest of the Hunters fifteen minutes to try and kill him for the Tower before he just takes it back to Achievement City.

Michael respawns and is attacked by a spider, which kills him. Gavin is followed by two zombies and narrowly avoids the blasts of two Creepers. He is killed by a zombie. Geoff shoots at Jack, knocking him off his cobblestone tower.

Gavin finds a random piece of cobblestone, but decides that it's just a piece of cobblestone. Jack makes it to the underside of Geoff's fortress, but is killed by the lava that pours from the hole he made. He goes back into his mine to look for resources, and Ray encounters a zombie in a cave. Gavin works on making ladders, hoping they will keep the lava away.

Michael makes a tower only to be shot off. Gavin uses Michael's tower to put his ladder on, and Michael tries to follow him up. Geoff shoots them both off, and Gavin makes a dirt tower, but is shot off again when he's in the crafting menu.

Michael caps Gavin's ladder while trying to get up to the top, and Geoff mines the Tower of Pimps in preparation to leave. He shoots at Michael, who dodges and discovers that he can't make his tower any higher. Geoff finally shoots Michael off as Gavin discovers what Michael's done to his ladder. While trying to fix it, he is killed by Geoff's arrows. Jack tries to hide as he makes a tower, but is shot off by Geoff.

Jack mines his sand tower as Geoff begins to make a bridge over his lava. Michael and Jack are killed as Geoff jumps into the water. Jack respawns on fire and is killed again. Geoff gets in a boat, and manages to get to shore. Gavin runs after him, only to be nearly killed by a Creeper.

Geoff thinks he forgot the Tower, which distracts the Hunters for a moment, but discovers that he still has it. Gavin breaks his spawn point and kills himself to respawn near Achievement City. Jack tries to kill Geoff, but is killed instead. When he respawns, he becomes lost (despite being behind Achievement City) and gives up. Gavin takes a sword and goes into Geoff's house to wait. The rest of the lads run for Achievement City, trailing Geoff.

Geoff gets to his podium, and Gavin tries to come out to kill him, but misses the door, giving Geoff time to put up the Tower of Pimps.

Geoff jumps off his Tower of Pimps, yelling about how he's finally won. He then tells the others what the piece of cobblestone Gavin found was: the marker for a chest containing diamond armor and tools, as well as iron ingots, lava, bread, cooked pork chops, and 64 ladders and cobblestone.