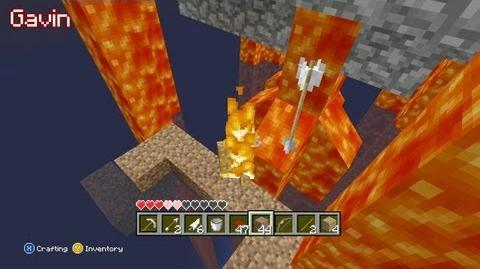 Let's Play Minecraft: Episode 16 - Tower of Geoff Part 2 is the 16th episode in the Achievement Hunter's Let's Play Minecraft series. Gavin, Michael, Ray, and the newly-arrived Jack must figure out how to get to Geoff to take back the Tower of Pimps.

The episode begins where the last one left off: Gavin on top of a tower of sand with lava coming towards him. In desperation, he jumps off the tower into the water, but dies from burning. Geoff is shooting arrows, and they are landing near Michael, who spots the lava pillars in the distance. Geoff asks if they want to give up, but the rest of the Hunters say they will keep fighting.

Gavin suggests that they make barracks, but doesn't know what they are. He runs into zombies, which kill him. Gavin then steals a bed from Ray's house after he respawns. He sets his spawn point closer to the fortress, then goes for more sand. As Ray fights off a Creeper, Jack comes into work and logs in to help.

Gavin makes another tower of sand to get to Geoff's fortress, but realizes that he has no tools. He punches out the floor, encountering more lava, but he drops into the water before he dies. Geoff hits Ray with an arrow as he tries to use dirt to get up, but Ray survives and makes another attempt. Michael runs from a Creeper while looking for Gavin's bed.

Ray is knocked off his tower by Geoff, but Geoff's crafting table keeps lighting on fire, giving Ray enough time to get started again. Geoff falls from his tower, and Ray makes it to the top. He mines the Tower and takes some of Geoff's stuff just in time for Geoff to make it back to the top. Ray jumps, and Geoff jumps in after him. Gavin and Michael converge on Ray, and Ray makes a plea to kill Geoff before him. They make it to shore before Ray is killed by Gavin, but Michael kills Gavin, and Geoff kills Michael. Gavin makes it back to the death point while Geoff is still searching the water for the Tower of Pimps blocks, and he hits Gavin a few times before taking the Tower back to his fortress.

Gavin starts making another tower to go up to Geoff, but doesn't realize that Geoff put lava above him until he's burning. He manages to get to the water before he dies, though, and tries to get back to the fortress while avoiding the now-flaming arrows. Gavin starts making a "Staircase of Ascendance" as the rest of the lads get back to Gavin's bed.

Gavin goes to get more blocks to make his staircase when he is killed by a Creeper. Jack decides to try to mine for diamond. Ray starts mining as well. Gavin makes his staircase high enough that he can take dirt from one of the previous tries to continue. Michael's screen shows him to be mining as well, but he breaks a wall and finds lava, losing a little health before he can stop it.

Gavin is finally in a place where Geoff can hit him with arrows, but he gets below the edge out of sight only to run into the lava. He leaps, but dies as the episode ends.