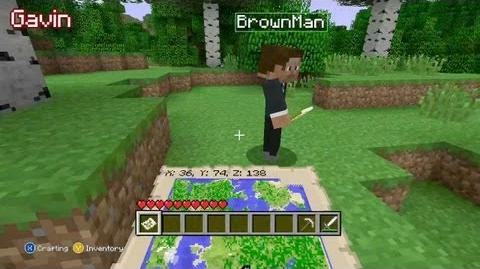 Let's Play Minecraft: Episode 15 - Tower of Geoff is the 15th episode in Achievement Hunter's series Let's Play Minecraft. In this episode, Geoff has once again stolen and hidden the Tower of Pimps, but Gavin, Ray, and Michael must find him and defeat him before they can take the Tower back.

The episode begins with the lads excited about a new Let's Play, but they notice that Jack and Geoff are both missing. Geoff reveals that Jack hasn't come into work yet, and that he is somewhere on the map with the Tower of Pimps. He explains the rules, and the game begins.

Immediately, Gavin, Michael, and Ray agree to work together to find Geoff, but also agree that they want to win too much to work together after they find the Tower. But as they explore, Gavin decides to go off on his own to explore by boat. Michael and Ray agree to continue helping each other, and search the woods for Geoff. Geoff's screen comes up, showing someone below him in a boat and revealing that he built himself a fortress in the sky over the sea.

As darkness falls, Gavin becomes frustrated, and Geoff promises that if they don't find him within half an hour, he'll make himself a little more visible. While looking at his map, Gavin nearly runs straight into a Creeper, backing away just in time to only take a heart of damage. Michael finds zombies while Gavin fights off a spider in the water. Michael and Ray tag-team a zombie that was following Ray and Gavin fights off a skeleton.

Michael and Ray get rid of another zombie, avoid two Creepers, and find wolves. Michael uses bones to tame one, but leaves it sitting on a hillside. Ray runs into a zombie, and he and Michael avoid a Creeper and a spider.

Gavin uses a divining rod (a stick) to pick a direction to go, and finds a tree with a sign that says "Bad News". Eventually, all the players make their way to the island where Gavin spent the night, and Gavin finds a Tetris Block of Pimps that was missed in the Find the Tower episode. Geoff then reveals that one of the players was so close that their dots would've overlapped if he was on the map. The rest debate who it was, and Geoff says it was Gavin only after the players are almost back to Achievement City. Gavin, however, doesn't remember where he was.

Michael is back at Achievement City when he runs into two zombies and is almost killed. Gavin avoids a Creeper as Ray outruns a skeleton. Eventually, all the players make it back to Gavin's island after Gavin spots Geoff's sky fortress. The lads prepare to storm Geoff's fortress and debate history as Gavin mines sand.

Gavin makes a sand podium as Geoff puts lava on the corners of his fortress. Geoff adds more lava to a hole in his fortress floor, nearly hitting Gavin as the rest of the Hunters laugh at him. Finally reaching the top, Gavin uses his pickaxe to break the block above him, only to reveal yet more lava. The episode ends without showing what happens to Gavin next.