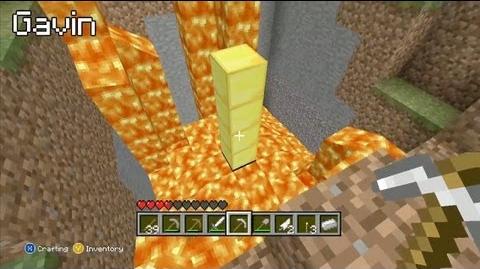 The episode opens with the lads discussing where Gavin last was, thinking he was near Achievement City. Ray ends up nearly dead from a skeleton as Gavin frantically makes tools so he can get back to what he thinks is the Tower of Pimps. Ray comes across Gavin, hits him with his sword, then steals his crafting table.

Jack has full iron armor, and is using his map to try to figure out where he's going. Michael comes across a buried Tower of Yellow Wool, and Gavin takes over an old mine. Michael finds another fake Tower, which Geoff says he let Millie make.

Gavin waits impatiently as his iron smelts, and Michael finds a different Tower of Sand. Jack backs away from one creeper into the blast radius of another, somehow avoiding being killed, and then finds a floating Tower of Dirt. Michael then comes across the Tower Gavin found in the lava, and figures that it's the real Tower.

Jack and Ray run into each other, agreeing to a temporary truce and to help each other kill Gavin if they need to. Gavin goes to find wood for tools, coming across Michael and killing him from behind. Michael reveals that one of the towers he found is the real Tower of Pimps, but doesn't say where it is. Gavin finds the Tower of Lapis-Lazuli on his way to the Tower in the lava. Michael says he knows where the Tower is, but he doesn't have tools since he respawned. Gavin bemoans his fate as he mines dirt. Michael heads for the Tower sans tools to kill Gavin, and Ray and Jack become frantic as they have no idea where the other two are.

Michael and Gavin face off on a hillside, with Michael winning as he has the upper-ground advantage. Gavin runs away and manages to get a hill advantage to kill Michael, then he makes a dirt bridge to get the Tower of Pimps. Michael respawns and goes immediately for Gavin, Jack thinks he knows where they are, and Ray asks Jack to tell him if he finds them. Ray finds another wool tower, and Gavin gets the Tower out of the lava.

As he is low on health, Gavin mines into the dirt nearby to hide. Michael shows Jack and Ray where the Tower was, and Gavin erects the Tower of Pimps in the dirt, admiring it before he leaves his cave. He stands in the open for a moment before being killed by a Creeper. Another Creeper follows Jack, but ends up killing the nearby Michael while Jack escapes damage.

Michael follows Gavin, distracting him so Jack can sneak up to kill him, but Jack falls into a hole, allowing Gavin to escape. Michael and Jack watch as a Creeper follows Gavin and kills him. Michael searches for Gavin's hiding spot. Ray finds Gavin as Jack accidentally backs into the lava and burns to death, losing most of his armor and tools in the process.

Michael finds the Tower of Pimps, but he doesn't have tools to mine it and recovers it. Ray follows Gavin to the general area of the Tower, finding it in the dirt. He mines it and while the lads debate on whether they have to announce if they have the Tower, Ray becomes lost. He reorients himself, and manages to get back to Achievement City and get the Tower of Pimps on his podium.

Ray jumps up and down on his newly-acquired Tower of Pimps while throwing roses onto the Achievement Hunter's logo. Gavin presses the button that activates the TNT from Plan G, but the Tower manages to survive and Ray keeps jumping as the episode ends.