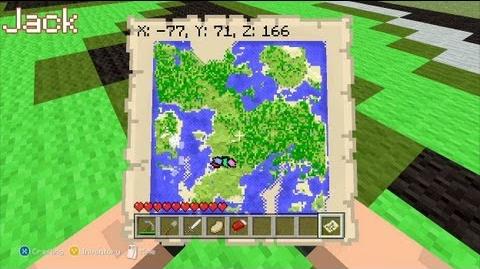 "Gavin may have just found the Tower of Pimps." ~ Geoff

Let's Play Minecraft: Episode 13 - Find the Tower is the 13th episode in the Achievement Hunter's Let's Play Minecraft series. This episode has Jack, Gavin, Michael, and Ray searching for the missing Tower of Pimps, which has been stolen and hidden by Geoff.

The episode begins with Geoff facing the others in Achievement City and trying to explain why they are there. Suddenly, everyone else loses their connection. When the rest of the lads are back, Geoff explains that there is something wrong with Achievement City, telling them to go discover what it is. Michael realizes the Tower of Pimps is gone. Geoff explains the rules, gives everyone a cooked porkchop, and the game begins.

The lads scatter, with Michael and Ray heading for the beach, Gavin going into the woods behind Michael's house, and Jack left in the center of Achievement City debating who to follow. Geoff adopts the role of commentator. Ray decides that he can do nothing until he has roses. Jack is the first to find a fake Tower, which is set in a cave and is made from yellow wool. Ray finds the same one soon after, also finding his roses on the nearby hillside. Michael decides to begin mining, but abandons it. The lads discuss sleeping arrangements, but this idea is discarded when Michael is killed by Gavin.

Gavin then finds another fake Tower, this one made of white wool, and is killed by a zombie. There is more talk about sleeping, which is made doubly impossible with the death of Gavin and loss of two players' beds.

Michael finds the next fake. Gavin breaks the rules by going to get supplies from Achievement City after he respawns. Michael makes a wool tower to gain a new vantage point, and Ray is killed in a surprise creeper explosion. Michael is also killed by a creeper. Gavin narrowly escapes a creeper, and happens upon a Tower of Diamonds, which he can do nothing about as he doesn't have the tools.

Ray smelts iron, and Gavin and Michael avoid monsters as they move through the world. Jack's screen shows that he has a good-sized cave system going. A few jokes are made at Jack's expense when Michael says that Jack is a cave. The lads talk about movies and Ray accidentally plants a rose. Michael is once again killed by a creeper. Gavin narrowly avoids the same fate, and Geoff emerges from his nighttime shelter.

Michael then finds another Tower: the Tower of Glass. Ray hides from a creeper, and Jack is shown to have found iron. Michael is killed by a creeper, but sees something in the distance. Ray manages to get there at the same time as Michael, who has respawned, but the Tower is fake with one wool block and three gold blocks. Michael tries to kill Ray with a block of dirt, but is easily killed.

Ray sees another Tower, but it is fake. He then finds a cave, but decides to not explore too far. Michael ends up in the top of a tree trying to find the Tower from the air. Ray finds the Tower of White Wool, which is renamed the Tower of Smokes when Ray says it looks like a cigarette. A little bit later, he finds another fake Tower: this one looks like a Tetris block made of gold wool. Ray then builds a tower of dirt to look around the world as the rest talk about Geoff exploring most of the map to hide the Tower of Pimps.

Ray finds an island with another Tower of Diamond, and he mines it to make tools and armor. Jack mines into the ground as night falls, and Ray takes his dot off the map. Gavin loses his map as Ray builds himself a house of dirt.

Gavin heads for the Wipeout map, going through it only to find that the Tower at the very end is fake. Michael is chased by zombies, and finds a collapsed Tower of Wool.

Gavin finds a Tower of Sand, only to be told that it's his own. Going just a little farther, he finds the real Tower of Pimps in a sea of lava, only to be killed by a creeper when he turns around. The episode ends with Gavin needing to make tools and the rest of the lads needing to find where Gavin last died.