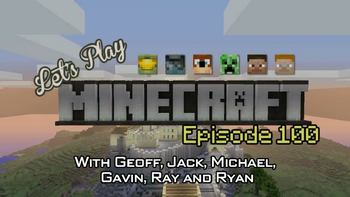 After a flashback sequence at the beginning in regards to Episode 3 (the debut of Achievement City) showing Gavin and Geoff constructing Downtown Achievemebt City on Minecraft at Geoff's house in addition to Gavin, Geoff and Griffon talking about the success and future of the Let's Play Minecraft, the scene goes to Downtown Achievement City as the Hunters converge in the middle. Geoff states the objective of the challenge: Eight clues are scattered throughout Achievement City, and four Hunters (Jack, Ryan, Michael, and Ray) are to try and find those clues (sGeoff and Gavin know where the clues are because they made this competition, they also made Achievement City so they won't compete in the competition). On the bulletin board in Downtown Achievement City, next to Kung-Fu House (where Ryan resides) the first clue sits. Each of the four scavengers get a map and three full stacks of dirt; along the way Geoff and Gavin, both flying and invisible, drop cooked steaks on the scavengers to counter their hunger.

The first clue mentions that Achievement City has many mushrooms but only one causes a height increase; this clue leads the participating Hunters to Mario. Jack is the first person to arrive, and acquires a gold block; the next clue involves cactus. Michael, Ray, and Ryan then converge (after the former two evade a Creeper) and acquire their own gold blocks. The cactus clue leads the Hunters to Capture the Tower (though Ray initially assumes it meant the cactus farm just outside Downtown Achievement City), where a second gold block per Hunter and the third clue sit in the cactus maze underneath the main playing field. Clue number three mentions Ghost Ray, leading to Thunderdome, where they need to find the chest in which the third item is held. Eventually, they acquire gold block number three and the next clue sit.

Jack, the first one there, decides to take a guess on where the next clue leads to (No Glory Hole) and manages to find it quickly (this is where Jack begins to pull away); the chest here contains a sign, and the clue leads to the vault underneath Geoff's house, but the target is in the Nether as evidenced by the Nether Portal in the Vault. This chest contains a diamond pickaxe, and the next clue leads to Achievement City Hospital where the final gold block relating to the Tower of Pimps is. Though Jack, now in a bit of a lead, is the only one to reach this chest in the target order, Ray somehow ends up here himself. It takes Ryan three tries to successfully get to the fourth chest of the hunt, as he has numerous loading issues and twice accidentally falls off (he fortunately landed in the water both times); Jack, meanwhile, tracks the seventh clue to Wipeout, then the eighth clue to the giant sheep just past the cactus farm, inside of which he finds the next clue.

Jack heads to the Altar of Pimps where he uses the diamond pickaxe to mine the very top block and falls down the hole, using the enchanted diamond boots to land safely on the golden structure inside. There, he finds a small room with an obsidian block and erects the Tower of Pimps, giving him the victory (and as Geoff stated, the winner of the first 100 episodes of Minecraft). There is also a chest Jack opens which contains a Potion of Night Vision, a Wither Skeleton Skull, and a Golden Apple. Geoff says that Jack should keep those items if he wants to have an advantage in Episode 200, which would take place in two years. After thanking all of the fans who have watched their Let's Play Minecraft series, the AH crew departs and the credits are played.

The end of this episode featured credits that summarized all 100 episodes of Let's Play Minecraft.

Retrieved from "https://roosterteeth.fandom.com/wiki/Let%27s_Play_Minecraft/episode_listing/Episode_100?oldid=67744"
Community content is available under CC-BY-SA unless otherwise noted.