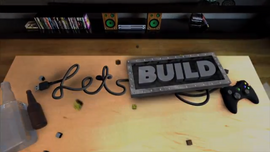 Let's Build was a subset of Let's Play Minecraft, where Geoff Ramsey, Gavin Free and sometimes others, such as Ryan Haywood, Lindsay Jones, Michael Jones, and Ray Narvaez, Jr., would build the structures used in all other Minecraft-related videos.

The origin of the series arose when the community kept complaining that they never show how they built the Let's Play and Things To Do In sets, so Geoff and Gavin decided to film an episode at their house while drinking.

Some Let's Build episodes revealed the structures used in Let's Play Minecraft episodes before they were actually released.