Lazer Team is Rooster Teeth's first feature-length movie, released on January 27, 2016. Written and directed by Matt Hullum, the project was funded by the Rooster Teeth Community from an Indiegogo Campaign. The campaign concluded on July 6, 2014 with nearly $2.5 Million dollars raised, roughly 385% of their original goal.

In the late 1970s, the Search For Extraterrestrial Intelligence project received a one time signal from outer space. It looked exactly as theorists thought a communication from an alien civilization would—unfortunately it has never been decoded. Or so we were told. Unbeknownst to the general public the signal was translated and told us two things:

The story is live action sci-fi comedy that takes place decades later in the aftermath of this event. Rooster Teeth will be holding a conference call for all our BTS-level and higher supporters on Tuesday June 17, 2014 during which will we cover the plot in greater detail. 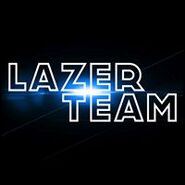