The Rooster Teeth Wiki
Register
Don't have an account?
Sign In
Advertisement
in: Inside Gaming, The Know, Achievement Hunter,
and 6 more

Kdin Jenzen (born November 14, 1988) is an American Internet and YouTube personality and show and podcast host best known for her work for Rooster Teeth and her YouTube channel, MultipurposeGaming. Known currently as the Lead Editor as well as Social Media and Community Manager of Rooster Teeth's entertainment-news channel "The Know", Kdin is also known as the creator and host of the web show Coming Soon, which documents upcoming video game releases and downloadable content within the month. She was the official 9th member of the Achievement Hunter team. Kdin was the Lead Editor for Achievement Hunter and the creator and host of the Coming Soon series, as well as a member of "Team Building Exercise" with Lindsay, Matt and Jeremy and "Team Mates" with Matt and Jeremy.

Kdin was home schooled before being transferred to the College of Southern Nevada High School West during Junior Year. She graduated with an AA from CSN in August 2005.

One of the original Community Hunters (a community member of Community Hunter), Kdin began producing Coming Soon in March 2013 under a temporary contract. She then moved from San José, CA to Austin, TX in October 2013, and began full-time employment at Rooster Teeth in November 2013, as a behind the scenes video editor and camera crew for Achievement Hunter, celebrating the one-year anniversary of Coming Soon in March 2014.

During her time with Achievement Hunter, Kdin was responsible for editing the weekly Let's Builds, Let's Plays, Countdown/Top Five, Play Pals, and Let's Play Minecraft, as well as any extra content such as Versus, GO!, etc. Additionally, she produced several shows for Achievement Hunter including Countdown/Top Five, Achievement Hunter vs The World, Tournament, Grab Bag, Let's Watch, Best Of..., Oh My Mod!, and Remix. She was mostly serving as a behind the scenes editor and camera crew at the time who never really provided much on-screen talent, but became a reoccurring host in Let's Build and was occasionally seen Let's Plays as well as in some episodes of AHWU, VS! and GO!.

A frequent extra in the RT Recaps produced by J.J., Kdin played a plethora of roles including: Joey the Giraffe, The Taichi Master: The Chronicles of the New Achievement Hunter Editor, and many more.

Kdin used to drive an electric-powered scooter called the Achievement Mobile 1.0 to work. On the RT Podcast #258 (1:34:25), Burnie describes his love for her scooter.

During the AH behind the scenes panel at RTX 2015, Kdin proposed to her partner Val. According to everyone on the panel, Geoff snuck into the panel just to see the proposal.

Kdin departed from Achievement Hunter on March 19, 2016, but is still an employee of Rooster Teeth, having merely transferred departments and now does editing work for The Know. She currently heads up all editing as well as Social and Community management for The Know.

In December 2016, Kdin revealed that she identifies as a transgender woman.[2]

During Extra Life 2017 Kdin was seen to be impervious to the "One Chip Challenge" much to the surprise of everyone else, and on Extra Life 2018 went one step further and attempted every step of the "Death Nut Challenge" in one go with impressive results.

On January 4th, 2021, it was announced in an Inside Gaming video that Inside Gaming Daily would not be continuing and that Kdin would become a member of Rooster Teeth's broadcast department.[3] 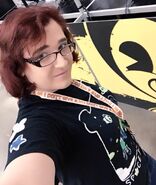 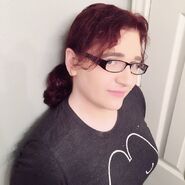 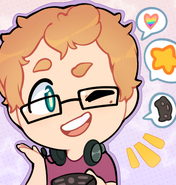