Joe was brought into the office by his owner, Burnie Burns. He was notorious for going to the bathroom in all the wrong places (for example, under office tables, by the fridge, and in the podcast studio).

He was particularly disliked by Matt Hullum and Gustavo Sorola. But he was loved by Gavin Free, Michael Jones, Lindsay Jones, Miles Luna and Monty Oum (despite Oum being highly allergic to cats).

It was announced live on Rooster Teeth Podcast 205 by Burnie Burns, that Joe will be retiring from the office in February 2013. In a status on Twitter, Burnie also announced that the team was throwing a retirement party for Joe.[1]

As one of his retirement gifts, Joe was awarded with a gold cat collar. He made a short comeback in Podcast #235.

He answers to no man, and made a short reappearance on RT Recap: Pets of RT.  In the video, he is depicted as having a deep civilized voice and wondering where Mildred the Mouse is. At the end, he is chased by Watson, Miles Luna's pet dog.

There is also a Joe The cat Shirt in the Rooster Teeth Store, featuring an image of Joe, seemingly passed out from his own retirement party.[2]

On Rooster Teeth Podcast 486, Burnie announced that Joe the Cat had passed away.

Extended Joe with Burnie, his caretaker 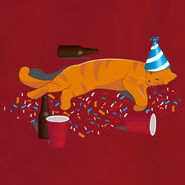 The Joe The Cat shirt in the Rooster Teeth Store.

Joe the Cat photographed before a podcast by Chris Demarais.[3]