The Rooster Teeth Wiki
Register
Don't have an account?
Sign In
Advertisement
in: Camp Camp, Male Staff, Red vs. Blue Cast,
and 5 more

Joe Nicolosi is an American filmmaker from New York, who moved to Austin after graduating film school in Ithaca College.[1][2] A lifelong fan of Red vs. Blue, he did the episode "The Brick Gulch Chronicles" on Season 14 and was subsequently hired to write and direct Season 15, taking over from Miles Luna.[3] He also provided there the voice for Jax Jonez. Nicolosi returned for Season 16, Red vs. Blue: The Shisno Paradox, co-written with Jason Weight. Other RT projects drove Joe away from season 17, Red vs. Blue: Singularity, but he still helped build the plot out of a brainstorm session with Jason and Miles. Joshua Ornelas and Austin Clark took over directing duties.[4]

In addition, Nicolosi has voiced a Beowolf Grimm named Marty in RWBY Chibi, and wrote and directed episodes of Camp Camp.

He is married and has a son. 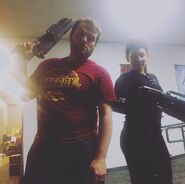