Jack is also Rooster Teeth's Charity Director, He coordinates and oversees live events, promoting them on the Achievement Hunter page, and asking fans and friends to be a part of the event. Jack also represents Achievement Hunter at conventions and expos, such as RTX, Let's Play Live, E3, NYCC and PAX, interviewing others as a gaming journalist, hosting panels, forming partnerships with video game developers like Mojang, Rockstar Games, and Ubisoft at these live conventions and expos by having members of Achievement Hunter playing sponsored video games and performing comedy sketches live on-stage in front of a live in-person audience, signings and autographs with members of Rooster Teeth that work outside of Achievement Hunter, the group working with different charities to raise money through livestreams and other methods. and more. Jack summed up the point in a statement; "When Rooster Teeth calls on its fans to support a cause, we can count on them to help us make a huge impact."

Jack is one of the "Main Six" on-camera hosts and cast members of Achievement Hunter - appearing in game content and live action content. He, along with his wife Caiti, take the lead on the yearly Extra Life 24 hour stream.

Jack was born in Austin, Texas[1], and raised in Leander, a suburb of Greater Austin. He attended Leander High School and University of Texas at Austin from 2000 to 2005, where he studied Radio Television Film (film making). Jack was a freshman on September 11, 2001, when about half his class walked out because the teacher turned off a TV showing what was happening in New York and proceeded to give a 90-minute lecture like a normal class.

Jack worked first at Aspyr Media, where he was a Creative Video Producer from February 2006 until December 2008. He also worked as a writer for Ain't It Cool News, Aspyr Media, from March 2001 up until July 2009.

Jack's first affiliation with Rooster Teeth was through meeting Burnie Burns and Joel Heyman at a poker game in 2007. Burnie had liked Jack's work with Ain't It Cool News and pitched him the idea of doing front page work for Rooster Teeth.

Jack and Geoff both created a game through Halo: Reach's Forge mode called Achievement HORSE which was updated weekly, with a concept similar to the basketball minigame of the same name. Gamers send in maps they create, and a clip of how to complete it, and Jack and Geoff compete in them, with the first to complete the map being the winner whilst the other being the titular "horse," gaining a letter per each round lost until the full word is formed. Sometimes, time restraints force Jack and Geoff to play a quicker version, and the game is changed to a much shorter version; Achievement PIG. Jack has hosted the Achievement Horse One Handed Edition, along with Michael Jones, where other personalities from the company played a Horse race map with one hand and had three chances to complete the race map. Eventually, more people in the company stared joining in, and Jack now holds yearly knockout tournaments.

In addition to Achievement HORSE, Jack and Geoff started the very popular Halo: Reach Fails of the Weak series. Fans would send in funny or interesting video clips containing gameplay footage, fails, or glitches from Halo 4. Each Friday, Jack and Geoff organize a montage of fails and narrate them with their usual antics. The series had its 100th episode on August 17, 2012, and has also developed into a large YouTube channel which takes clips from any game, with Jack and Geoff compiling the best every month. Occasionally, other people will be featured if either Jack or Geoff are unavailable.

He also frequently records with the Drunk Tank crew and Jack co-hosted the Achievement Hunter Weekly Update, or AHWU for short, until its conclusion in 2021. In AHWU, Jack talked about gaming news and rumors, while Geoff discussed new releases and achievements, while all the Achievement Hunter crew try to create distractions.

Though his main focus is Achievement Hunter, he still occasionally appears in some of Rooster Teeth's other content, ranging from live action productions to animated series, cartoons, their Podcast, and conventions.

Appearances outside of Achievement Hunter[] 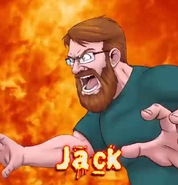 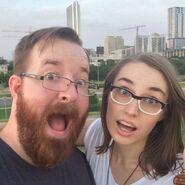 Jack and his wife, Caiti Ward 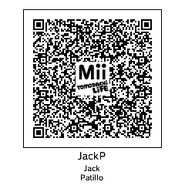 Jack without his iconic beard