Jose Jones "J.J." Castillo is a former Rooster Teeth employee, who was in charge of RT Recap and various live action projects, as well as the host of the Screen Play podcast. Before this, he was the editor of the Achievement Hunter's "Let's Build" series.

J.J. confirmed his departure from Rooster Teeth on January 16, 2015.

He first worked for Rooster Teeth covering RTX 2012, and was later hired to work on The Gauntlet.

He was well known for his interesting supplements to the Let's Build videos he edited and his odd sense of humor in general. He announced at the end of "Let's Build in Minecraft - The Twelve Towers" that it would be his last video with Achievement Hunter.

He continued to produce live-action Rooster Teeth series and hosted Rooster Teeth's TV and film podcast Screen Play for its entire run. He portrayed Mercury Black in RWBY Volume 2 and also provided a minor speaking role in the first episode of X-Ray and Vav as a passerby.

J.J. had a public access show in South Texas when he was in high school. He later hosted a music show in Austin and then acted in Toyota commercials and TV shows.

J.J. confirmed his departure from Rooster Teeth on January 16, 2015. On his final post on his RT profile page, he thanked both the staff and fans for a wonderful time at Rooster Teeth.[1] The role of Mercury Black was given to Yuri Lowenthal.

He has made cameo appearances in some of the RT Recap videos. 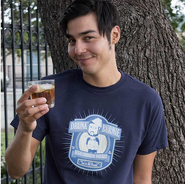 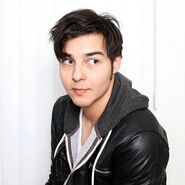