The Rooster Teeth Wiki
Register
Don't have an account?
Sign In
Advertisement
in: The Know, Achievement Hunter, Rooster Teeth Staff,
and 9 more

Gustavo Raul "Gus" Sorola III is one of the three original members of Rooster Teeth Productions. He works as a voice actor in the machinima series Red vs. Blue as Dick Simmons, as well as the computer in The Strangerhood (along with Geoff Ramsey). He is married to Esther Sorola. His live-action credits include the Rooster Teeth Shorts, and managing the RT Podcast.

Gus was a founding member of Rooster Teeth Productions, coming from Drunkgamers with Burnie Burns and Geoff Ramsey. He has attended many panels and events in his 15 years of employment with the company. He is one of several IT professionals at Rooster Teeth, along with Ben King and Adam Ellis. He also runs the Rooster Teeth Podcast formerly known as "The Drunk Tank". In the RT Podcast, Gus reveals many anecdotes about his life, including stories about his childhood on the US/Mexico border, and his early career. Gus is of Hispanic descent; both his parents are Mexican. While born in Austin, Gus was raised in Eagle Pass, near the US–Mexico border. A visit back to this hometown is the subject of the RT Doc Common Ground 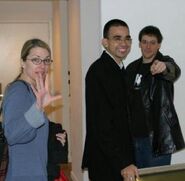 A highly known PhotoShop of Gus

Sleeping peacefully on a flight with Geoff Ramsey and Matt Hullum