The Rooster Teeth Wiki
Register
Don't have an account?
Sign In
Advertisement
in: Camp Camp, Gen:LOCK, Male Staff,
and 12 more

Gray G. Haddock was the Head of Animation and previously served as a creative role at Rooster Teeth Productions, which he first joined doing compositing in Red vs. Blue: Season 9. He returned the next season to become the Lead VFX Compositor. Gray has since become a producer and writer on Camp Camp, writer and director for Gen:LOCK, and the voice actor for Roman Torchwick from RWBY, Locus from Red vs. Blue, Rusty Bonjour from X-Ray and Vav and Billy\Willy Zane from Sex Swing.

Outside of Rooster Teeth, he is known for voicing characters from other anime and video games.

Gray's wife, Lara Toner, is also an actress, and has a cameo in gen:LOCK.

On June 20, 2019 Haddock stepped down as the Head of Animation, being given a purely creative role in the division instead,[2] after several former RT animators had complained on Glassdoor.[3] Their complaints revolved around general mismanagement, Crunching, (the act of forcing employees to work overtime right before a release), and over reliance on contract workers who would be promised permanent work but then let go. Matt Hullum addressed these complaints in an apology acknowledging them and stated that the Animation department had been going through an internal review and Haddock being removed from head animator was not influenced by the controversy.

On September 13, 2019, in response to various Rooster Teeth layoffs,[4] Haddock announced that he had recently parted from the company.[5] However, he claims he was already transitioning out, and his work as an independent contractor would probably lead to more gigs with RT.[6] 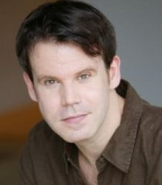 An aged photo of Haddock.