Gavin David Free (born May 23, 1988 (1988-05-23) (age 33)) and also known as Gav, Gavy, Gavino, Gavə, or Geh, is a British English-born filmmaker,[1] slow motion cinematographer, cameraman, actor and voice actor, comedy producer, entertainer, editor, special effects supervisor, show and podcast host as well as an Internet and YouTube personality who is best known for his Dumbassery and work at the Austin, Texas media production company Rooster Teeth – where he formerly served as creative director from late 2015 until early 2016 – and stars in many of Rooster Teeth's project shows including co-hosting the slow-motion YouTube channel  The Slow Mo Guys and co-hosting the video gaming based YouTube channel Achievement Hunter gaming division as well as Red vs. Blue, RWBY, Million Dollars, But..., Crunch Time, Day 5, the RT Podcast, On The Spot, The Off Topic Podcast and more. He directed season 7 of Red vs. Blue, as well as its miniseries Relocated. Free was discovered by Rooster Teeth after he became one of its most-followed website members.

Slow-motion cinematographer and comedy producer Gavin Free was born in Hillingdon[2], and raised in the town of Thame in Oxfordshire, England,[3][4] where, for his education, he attended Lord Williams's School in 1999, where he initially met Daniel Gruchy.[5][6] When he was 1 year old, his grandfather lent him his old Hi8 video camera and he started making silly home videos. In addition to his interests with filmography (especially in slow motion), Free also played lots of Halo video games (Halo:Combat Evolved and Halo 2) as a teen. Free first heard of Rooster Teeth in 2003 through its science-fiction series "Red vs. Blue," which puts voices on top of footage from the "Halo" video game franchise to create new storylines. He started his acting career on April 1, 2003 by voicing the Red Guard in Red vs. Blue: The Blood Glutch Chronicles. Free eventually became one of the most followed users on the website and caught the eye of Rooster Teeth executives. He signed up on the original Red vs. Blue phpBB website on May 11, 2003, eventually joining the newer version of the site on September 30, 2004 as user #82 and Sponsor #2. Rooster Teeth co-founder Burnie Burns, the company's chief creative officer, met Free at a New York screening in 2005 (the same year Gavin became a moderator and admin on the website), and asked him to direct the seventh season of "Red vs. Blue."

Free began using phantoms at age 16 in 2004.[7] After graduating from high school in the spring 2006, Free joined Green Door Films, offering Phantom Flex and Phantom Flex 4K Camera Hire worldwide and the first production house in Europe to use Phantom digital high-speed cameras as a source of slow motion, working as a Data Technician and Camera Operator. He began working on adverts, TV shows, short films and music videos for U2, Enter Shikari, Klaxons, Kasabian, The Chemical Brothers, X-Press 2, and the "Everybody Hurts" charity single. Free also worked at his local Waitrose in his home county of Oxfordshire, where he met Daniel Gruchy the second time and befriended Dan.[8]

In 2007, Gavin visited America and went to Austin to intern at Rooster Teeth and work on RvB episode 100 (the final episode of Red vs. Blue: The Blood Glutch Chronicles, and the season 5 finale), which was released on June 28, 2007 and later that year helped Burnie create Grifball. He edited Grifball highlights and recorded and released his first Achievement Hunter community video on September 24, 2008.[9]

In the fall of 2008, Gavin was originally hired by Rooster Teeth Productions for the seventh season of their machinima series Red vs. Blue. Free also directed its mini-series Relocated.[20][21][22][23][24] He acted in Rooster Teeth's comedy mini-series Captain Dynamic on February 26, 2009 and began appearing in Rooster Teeth Shorts the same year on August 2, 2009. Red vs. Blue Season 7: Recreation debuted on June 9, 2009 and concluded on October 26, 2009. It's miniseries was released from February 9, 2009 to March 9, 2009.  After directing and working on Red vs. Blue Season 7, he had decided to make a move to Austin, Texas and work full-time for the company.

On August 15, 2010, Gavin created the Slow Mo Guys channel along with friend Daniel Gruchy in order to get a work visa.[25] The consists largely of various objects being filmed using Free's Phantom high-speed cameras. In April 2011, the channel was voted the winner of YouTube's On The Rise program, which highlights up-and-coming YouTube partners on the homepage. In September 2012, they were featured on The Tonight Show.[26] In February 2013, Free announced that The Slow Mo Guys had been picked up by Rooster Teeth and that further episodes of the series would be released on Rooster Teeth's website, as well as the series' existing YouTube channel

In May 2013, Free began starring as a "lab rat" in the Rooster Teeth series Immersion, replacing Geoff Ramsey and Gus Sorola. In Immersion, Free must test video concepts in real life alongside friend and co-worker Michael Jones.[29][30][31] He was a contestant in the second season of Rooster Teeth's gaming show The Gauntlet in late October 2013[32][33] Free has had two cameo appearances in Barenaked Ladies music videos for their songs "Odds Are" (2013) and "Did I Say That Out Loud?" (2014). In the latter video, he is portrayed as accidentally lighting himself on fire when trying to play a song for his domestic partner Meg Turney, which subsequently goes viral.[34][35][36] Free and The Slow Mo Guys co-star Daniel Gruchy appeared in YouTube Rewind in 2013, playing themselves being pulled by an RV, itself a nod to Breaking Bad, while an explosion goes off behind them. The two both returned for the YouTube Rewind 2014 and 2015.

Free began starring in the Rooster Teeth animated superhero comedy web series X-Ray and Vav (which originally resulted from a flub he made in the intro for a Halo 4 achievement guide) in late November 2014. He voiced Vav alongside former Achievement Hunter employee Ray Narvaez, Jr., who voices X-Ray. The season was renewed for a second and final season, which premiered in July 2015, with the show concluding on December 2015. That same year, he appeared in Rooster Teeth's murder mystery comedy series Ten Little Roosters as a fictionalized version of himself and was a contestant on the improvised comedy series @midnight on Comedy Central.

In May 2015, Free and Rooster Teeth co-founder Burnie Burns hosted multiple episodes of the hypothetical scenario series Million Dollars, But..., in which each person comes up with a typically difficult scenario; for example, having to date Adolf Hitler for a year — which the cast comically re-enact — for which they will be given a million dollars. The pilot episode premiered on 21 May 2015, with the series continuing on 9 July 2015. He was a reactor on the web series YouTubers React in August 2015. Free became the creative director of Rooster Teeth on October 26, 2015, replacing Burnie Burns who was then promoted to chief creative officer.[37][38] However, he stepped down in late February/early March 2016, wanting to focus and dedicate his time towards SMG and AH.[39]

In early 2016, Free starred as Woody in Rooster Teeth's science fiction action comedy film Lazer Team. The film was released theatrically on 27 January 2016. It received mixed to positive reviews from critics at film festival showings and upon its release. He joined the voice cast of the anime web series RWBY as Scarlet David for its third volume.

On 5 April 2016, Free was nominated for a Webby Award in the Best Web Personality/Host (Online Film & Video) category for his work on The Slow Mo Guys. At the 2016 Streamy Awards, Free won for Cinematography. Gavin returned to hosting panels at RTX 2016.

On August 5, 2016, Gavin and Burnie announced that there would be a sequel to Lazer Team, which was green-lit by Rooster Teeth in partnership with YouTube Red and they had officially began pre-production on the film. He participated in filming from March to late April 2017, before subsequently participating at the Let's Play Live East Coast Tour. 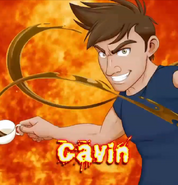 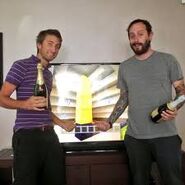 Gavin and Geoff showing off the Tower of Pimps in Minecraft 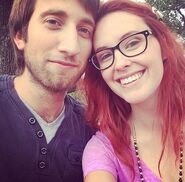 Gavin with Joel, Becca and Geoff in RT Booth at Comic Con 2007

Gavin during his first trip to Austin 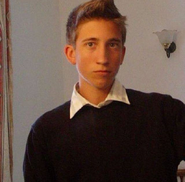 Gavin in his Secondary School Uniform 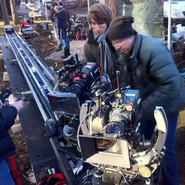 Gavin on set of Sherlock Holmes: A Game of Shadows 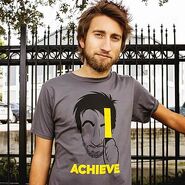 Gavin, age 14
Add a photo to this gallery

Retrieved from "https://roosterteeth.fandom.com/wiki/Gavin_Free?oldid=72672"
Community content is available under CC-BY-SA unless otherwise noted.