Fiona Piccoli, known professionally as Fiona Nova, is a content creator, production coordinator, streamer, cosplayer, and actress who was a recurring host at Achievement Hunter. She was the showrunner and host of This Just Internet and F-ing Around with Ify and Fiona. She was also the voice of Agent One in Red vs. Blue: Zero.

Prior to working at Rooster Teeth, Fiona was a notable cosplayer.[4] She was invited by the Fortnite team to cosplay at their booth at E3 2018.[5][6] She was also one of the hosts of the 2018 Overwatch World Cup and a Bandai Namco charity livestream. [7][8]

After appearing as a guest on multiple occasions, Fiona was welcomed into Achievement Hunter on March 1, 2019 during Off Topic #170.

Starting in September 2019 a series of pilot episodes for Fiona's first show, Clickbait, were released.[9] In the show she introduces the other members of Achievement Hunter to current memes and trends. In January 2020 the show was renamed This Just Internet and had its first season. A second season started that June. [10]

In April 2020 she co-created a live podcast called F-ing Around with Ify and Fiona.[11] The eponymous hosts and their guests play games while conversing with members of the live chat.

Fiona was also a contestant on the first seasons of Last Laugh and Hardcore Minigolf.[12][13]

During RTX at Home it was announced that Fiona is one of the showrunners and cast members of the upcoming Dead Little Roosters series.[16]

Welcome to the AH Family @FionaNova! 🎉

On March 8, 2021, Fiona announced she was leaving to become a producer for G4, while remaining open for voice roles with Rooster Teeth. 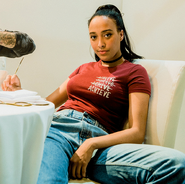 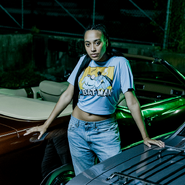 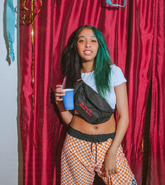 Announcing Fiona getting hired on Off Topic #170