The Rooster Teeth Wiki
Register
Don't have an account?
Sign In
in: Female Staff, June Birthday, Editors,
and 3 more

Eleanor "Ellie" Main is a former Creative Producer for Rooster Teeth. She was a writer, director, editor, and camera operator for The Lab, as well as the host/star of Skill Tree, an RT Production where she trained and prepped for the inevitable and oncoming apocalypse. She also became the host of RWBY Rewind for Volume 6 of the show.

Ellie Main made her debut in Burnie's Vlogs as the CCO's Executive Assistant, but has since grown into her own as a valued and beloved member of the company.

Role in the company[]

Ellie Main served as a Creative Producer and Personality for Rooster Teeth. She wrote, directed, edited and shot for "The Lab", was the host/star of "Skill Tree" and has appeared in a variety of the company's content.

Ellie moved to America for personal reasons, getting her VISA 18 months after arriving. She was working at a café when she met Josh Flanagan, who mentioned they, Rooster Teeth, needed a producer for "A Million Dollars But...". Ellie's qualifications checked out and she began working for Live Action.

"That's where I worked. In Live Action, as a P.A and then as a coordinator, for about a year. I met Burnie at RTX and he and I got talking about all of the weird and luckily wonderful jobs I'd had and he asked me if I wanted to be his assistant and everything kind of grew from there..."

Ellie makes her first, big public appearance as Burnie's Executive Assistant in the RT video "Burnie Vlog: New Assistant and a Cheese Dinner". From that point forward, she begins to pop up more-and-more frequently, becoming a regular on the series.

And then the Performance Review happened.

"I realized that, since you're my assistant, you travel with me pretty much everywhere. So, STATISTICALLY, you are the person who is most likely to be right next to me in the event of an apocalypse..." - Burnie Burns

Burnie decided that the "bodyguard aspect" of Ellie's job could use some improvement. And so, every Burnie Vlog after this would have the side-story of, or sometimes just full-on feature, Ellie learning some new skill in order to become a hardened, post-apocalyptic warrior. Some of the survival skills Ellie learned on the vlog included: Blacksmithing, Krav Maga, Sniping, being able to shoot a machine gun out of a helicopter . And this just kept escalating and escalating, until...

"Now, statistically, the biggest threat to ME is YOU. Because of all these skills you have, and your proximity to me on a regular basis, now you've become far too threatening and dangerous for me to work with." - Burnie in Ellie Gets Fired

This was one of the last episodes of the Burnie Vlog Series, so the actual reason for this "firing" was most-likely to give Ellie a proper send-off for the audience. Never-the-less, after this, she was no longer Burnie's Executive Assistant. Instead, Ellie Main becomes a Rooster Teeth Creative Producer, and begins writing, directing, editing, and shooting for...

The Lab is a branch of Rooster Teeth that specializes in, well, nothing and everything! It's purpose is to serve as both a "testing grounds" and "playground"; a space where RT can float new series premises with their audience, as well as just a fun, non-committal dumping ground for quick and random videos the crew feels like shooting.

Even the Labs Team itself reflects this "everything" sort of mindset, as Ellie explains,

"We're all 'Producers' meaning that everyone on the team can write, shoot and edit so we can all collaborate and switch up the roles. It's so creative - I love it."

Popular series/videos that have spawned from "The Labs" include "Me vs Drunk Me", "Drunk Red vs. Blue: The Lost Episode", and Ellie Main's new show, "Skill Tree".

Skill Tree is the continuation of Ellie's journey towards becoming an unbeatable, future post-apocalyptic warrior. The first episode, "Skill Tree: Stealth" was released April 11, 2018 to the RT Site. The show ended up being a short-lived series consisting of only a handful of episodes.

Ellie Main has been on a few RT Podcasts, an Always Open, a few On The Spots, and helped host Extra Life 2017.

On September 17, 2019, Ellie announced her departure from the company on Twitter.

Ellie Main was born on June 14, 1991, in Kent, South-East England. Her parents had two other daughters, Ellie's sisters, Jessie and Caroline, and today live in the London-ish area.

Ellie's childhood household was a musical one. Her Father is a self-taught Pianist (after his teacher rejected his suggestion to learn Elton John instead of Beethoven) and she grew up listening to him sing and play almost every evening. Ellie started playing the drums at 10 years old, was in a 50-piece Jazz Band throughout most of school, and has even recently taken up Guitar, as displayed in the Final Burnie Vlog. Everyone in her family plays an instrument, her sister Jessie even having a few covers up on her YouTube Channel.

Ellie and her sister, Caroline, train for the apocalypse together in "Burnie Vlog: Foraging in Kent" and her Mother, Laura Main, created a Twitter Account specifically so that she may keep up with Ellie and her work at Rooster Teeth.

Ellie attended Kingston Grammar School in Kingston, South-West London when she was 16 years old, from 2007-2009. After graduating, she applied and got into Bournemouth University (B.U.) in Bournemouth, Dorset, England, 2010, graduating with a "Bachelor of Arts (B.A) Degree in TV Production" come 2013.

While working in Thailand, Ellie meets an American from Austin, Texas. The two hit it off and soon enter into a long-distance relationship. This lasts for a little over 2 years, until, "It kind of got to the point where it was like 'We've gotta do something about this. Someone's gonna move here (Austin) or there (London)'."

At the time, Ellie was working freelance in Advertising and not loving it, so she decides to make the daring leap and move to Austin, where she and her no-longer long-distance boyfriend get married soon afterwards at the age of 23. She soon after meets Josh Flanagan at a café and gets hired by Rooster Teeth, starting a new chapter in this story.

However, just as there are beginnings, there are also endings. Ellie Main and her partner began to experience marital problems. They tried to make it work, undergoing couple's therapy for 18 months straight in an attempt to salvage their relationship, but unfortunately, the two of them just weren't compatible. Ellie Main got an amicable divorce January, 2018. She debates whether or not to move back to England, however ultimately decides to stay at Rooster Teeth.

"It was clear it wasn't going to work and it's the best thing for both of us. And it's still painful right now, but I think that we'll look back on this and be like 'I have so much respect for those two people and what they did.' Because otherwise, we would never have known and I would probably be sat in an office in London being like 'What if I'd run away with that American guy?'... there's no such thing as wasted time."

NOTE: Divorce is a very serious subject matter and we are not attempting to make light of Ellie Main's in any way. The quotes above were taken from Always Open: Episode 57.

Ellie Main is a musical person by nurture and has recently started to release covers of her own, both on her YouTube and Bandcamp pages. Even more exciting, her and local Austin musician, James Moritz, have started their own band! Wild Disguise specializes in "vibrant, melancholy, dreamy rock-and-roll" and have recently released their first EP, "Out of the Box". "You can only find us on Spotify and iTunes!"

Ellie streams frequently with friends on Let's Gay - a Twitch Gaming Channel founded by Max Kruemcke and Chelsea Harfoush. They have both a Twitter and YouTube Account, and hosted for an hour during Extra Life 2017. She also streams on another Twitch Channel, but more on that in the next section...

Ellie is an avid watcher of "Queer Eye", as well as lists on her Rooster Teeth Account that she is a fan of TV Shows "Doctor Who", "Crazy Ex-Girlfriend", "Game of Thrones", "Gravity Falls", "Luther", and "Insecure", though through the RT Podcast, we know she likes "Black Mirror" as well. She also lists "The Lord of the Rings" and "Harry Potter" novels as her favorite books. Miles has recently introduced her to "Avatar: The Last Airbender" and "My Hero Academia". She is a supporter of the "England National Football Team," being very vocal and invested leading up to and during their 2018 Semi-Final match against Croatia.

When it comes to musicians, Ellie's RT Profile shows she listens to "Maggie Rogers", "Ray Lamontagne", "Bethel", "Ben Howard", and "Panama". In an interview with BIGBITE Magazine, Ellie Main is asked what some of her musical influences are...

"I love folk / acoustic music - that's my soul food! Ben Howard, Maggie Rogers, and Ray Lamontague are a few of my favorites. I love Chvrches and the mix of high energy beats and synth with dark and poetic lyrics... The band I'm in (Wild Disguise) is inspired a lot by Fleetwood Mac and the Beegees... I grew up listening to Queen and The Who... I'm inspired by a lot of different styles, I guess!

Ellie likes to stay fit, jogging regularly, and has expressed her love of travelling multiple a time. She is very socially active, being honest and open in regards to her religious beliefs, political stances, etc. and will even be helping host a Panel about Activism this coming RTX Austin. She has a dog named "Gus" who she sometimes jogs and streams with, one of those streams being Extra Life 2017.

"Should we tell them?"

On Episode 1 of Why Kanto We Be Friends? (At 1:53:35) - Ellie and Miles' Pokémon Leaf Green Nuzlocké Series that they stream together on his Twitch Account, the two revealed that they were dating. In the episode, they joke that they became a thing during Extra Life 2017, keeping their relationship on the down-low until now. 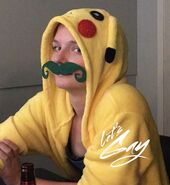 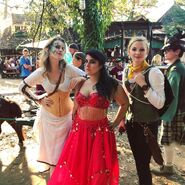 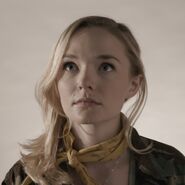