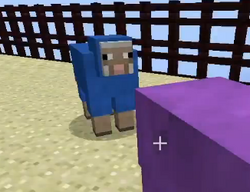 Edgar II was a sheep dyed blue, named by Ryan. Aside from Edgar the cow, Edgar II was the third animal named or claimed by Ryan. It made appearances in two episodes of Things to do in Minecraft: Hot Hoof and Hot Hoof X.