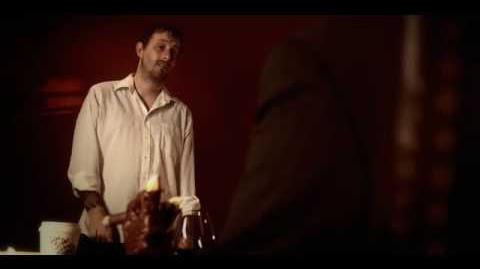 Crazy Dream is an RT Short released  in June 26, 2009. Geoff chronicles a crazy dream that became all too real.

Joel Heyman walks by Geoff Ramsey and notices that he is lost in thought. When Joel questions him, Geoff recalls the events of a dream he had the previous night. He remembers meeting a sad "Meghan Foxx" at a party. When asking what's wrong, he found out that in exchange for being incredibly hot, Meghan must exchange her soul with the devil. Meghan promises to make out with Geoff in return for him getting her soul back. When Geoff goes to Hell, however, the devil refuses to hand her soul over, which is locked in a box of despair and suffering. Geoff manages to distract the devil and steal the box, thus returning Meghan's soul.

Joel doesn't see the problem with this dream. Geoff then takes out a mysterious and sinister black box, which he says is the box he stole from the devil. Geoff tells Joel that he found it lying on his chest the next morning, and that everytime he tries to get rid of it, it always finds its way back to him. Joel asks Geoff if he looked inside it, and Geoff confirms this. What Geoff saw caused him to completely break down into tears. Geoff demonstrates its powers on Nathan Zellner, who immediately gets depressed when looking into the box, but reverts to his normal self after the box was closed.

Joel offers to take the box off Geoff's hands, and Geoff brings out an agreement contract. After some arguments, Joel signs the contract (with Gus's name) but immediately regrets his choice. Joel wakes up, thinking it was a dream and is urged to go back to sleep by "Meghan Foxx." As he goes to turn off the alarm, he discovers to his horror that he is now in possession of the box. He decides it was worth it, but has difficulty completely closing the box to stop the screaming.

Cast in Order of Appearance[]