Christopher "Chris" Demarais (born January 18, 1987) is an American writer, director, actor, voice actor, on-camera host, content producer, editor, best known for working at Rooster Teeth as the Head Writer of Live Action and Content Producer, often working on RT Shorts, Day 5, Lazer Team, Immersion, The Gauntlet and Social Disorder. He additionally appears on the Podcast, Screen Play, On The Spot, Immersion, Always Open, and A Simple Walk Into Mordor. He is a cast member and head writer at Rooster Teeth Productions who is currently one of the writers for the movie Lazer Team, along with Josh and Burnie, and often guest stars in the entertainment company's other shows such as The RT Podcast, Immersion, On the Spot, and RT Shorts

Chris was a Salutatorian in High School and graduated from the University of Texas at Austin where he received two Bachelors of Science (B.S.) in Radio-Television-Film and Corporate Communication. He attended from 2005-2009.

Chris provided small roles in Red vs. Blue as a Freelancer ODST in Season 9 and a Space Station Guard in Season 10.

He also voices Robber #2 (Frank) in X-Ray and Vav.

Chris heads up a lot of the live action productions at Rooster Teeth. This could include shorts, entire series, commercials, etc. He typically writes, produces, direct, and edit projects he head up. Chris also often works on the visual effects for the show Red vs Blue and our commercial department.

As of 2015, Chris presently serves as the Head Writer of Live Action. He is a director, writer and actor but his main job is as the Head Writer of Live Action, having been involved in some of the company's most high-profile projects including Day 5, The Gauntlet, Immersion, RT Shorts, and Lazer Team, Rooster Teeth's feature film. Chris is also the star and co-creator of the hit shows Social Disorder and A Simple Walk Into Mordor.

Appearing not only in Rooster Teeth related series, Chris has acted in multiple comedy shorts and in the web-series The Wingmen.

Chris has appeared in numerous Shorts in Season's Three, Four, and Five.

He plays Russ in iBlade and is a main character in Ten Little Roosters.

A Simple Walk Into Mordor[]

Along with Kerry Shawcross, Chris traveled to New Zealand where they walked a total of 120 miles in 6 days from the place where The Shire was filmed in the Lord of the Rings series, to the mountain filmed as Mount Doom.

A live action hidden camera show where Chris and Aaron Marquis create elaborate social experiments and pranks to compete against one another for points. 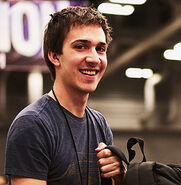