Caleb Thomas Denecour is a former staff member at Rooster Teeth. He was hired as the Community Manager of Achievement Hunter on June 1, 2011.

On October 3, 2017, Caleb announced his departure[1] from Rooster Teeth to continue his pursuit in playing Ultimate Frisbee professionally. After Caleb departed from Rooster Teeth on Oct. 16, 2017, Geoff stated in a Let's Play: Prop Hunt episode that Caleb was fired for screen peeking.

He currently resides in Minnesota, where he plays for elite Ultimate club team Minneapolis Drag'n Thrust. He has played professional Ultimate on teams Minnesota Wind Chill and Austin Sol (part of the American Ultimate Disc League). He plays as #49 in the Cutter position.

He previously showed up on occasion in Let's Plays but is mostly involved with keeping the community under wraps. He was in charge of Achievement Hunter's social media accounts. He organized community playdates and Game Nights, and took care of the Community Hunter channel. He also plays ultimate Frisbee and coached the team at Texas State University, giving him the name of Achievement Hunter's resident athlete.

In November 2014 he became the Content Manager of Game Kids, which launched on December 1, 2014.

Caleb and his younger brother, Jordan, created cooperative gaming videos on both their personal channel and on the Game Kids YouTube channel.

Caleb captained the green team in the first season of the Gauntlet and led his team to a 3rd-place finish.

Caleb created and regularly hosted the series with Geoff Ramsey. Later, he shifted the show from a weekly recap episode to a monthly hour-long live stream for website FIRSTs.

Caleb has appeared in multiple episodes of Minecraft Let's Plays. Typically, his role was to communicate with the creators of community-made maps, relaying instructions to the rest of the crew. He is banned from competition in Let's Play Minecraft because of a few incidents involving screen-looking and fish theft.

He is listed in the credits at the end of Episode 100 despite not being a regular in the series. 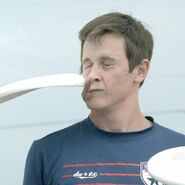