The Rooster Teeth Wiki
Register
Don't have an account?
Sign In
in: Voice Actor, RWBY Cast, Red vs. Blue Cast,
and 3 more

Arryn Zech is a graduate of the University of Texas at Austin with a degree in journalism. She is a gamer, voice actress, photographer, and writer. She has a small dog named Watson. Arryn had a personal YouTube channel where she occasionally posted videos.

In the Rooster Teeth series, RWBY, she voices Blake Belladonna, one of the four main characters along with Lindsay Jones, Kara Eberle, and Barbara Dunkelman. Arryn is also the voice actress of Dr. Emily Grey in Red vs. Blue, where she also did various filler voices.

Born in Spain before moving to America as a kid, Arryn can be seen in various live action shorts and RT Recaps during her work at the company.

Arryn worked as a guardian at RTX up until the year RWBY came out, when the staff realized people were recognizing her.

In August 2015, Arryn announced that she would be leaving Rooster Teeth and moving to Los Angeles at the end of September in her journal. She announced her amicable split from Miles in the same post.

However, she still does voice work for Rooster Teeth (as Doctor Grey and Blake Belladonna), and she remains good friends with the Rooster Teeth staff (particularly the RWBY people). She has been a guest on Always Open thrice, in two of those along with her RWBY costars.

Arryn dressed as her character from RWBY, Blake Belladonna 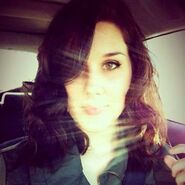