Member of the Internet Box podcast

Andrew Joseph "Andy" Blanchard was formerly an intern for Achievement Hunter at Rooster Teeth Productions, before being hired part-time in May 2016 and eventually working full-time at Achievement Hunter from July 29, 2016 until his departure on September 12, 2019.[1]

He is originally from West Barnstable, Massachusetts where he has lived his entire life before starting his internship for Rooster Teeth. When first moving to Austin, Texas in 2016, Andy stayed with longtime friends, and fellow Internet Box Podcast members, Michael and Lindsay Jones. He has since moved into his own apartment.

He has made appearances in several Let's Plays, On The Spot, and various other Achievement Hunter videos.

Andy and Matt Bragg won the first Sports Friends: BariBariBall tournament, forming the first team involving Andy and also the first involving an intern. The team was known as: Team Jesus and the Intern. They proceeded to lose the next tournament.

His text color when appearing in a Lets Play or Things To Do is a rainbow.

Andy being adorable on "On The Spot" 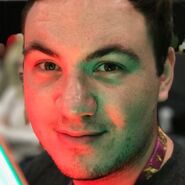