This article is about Alfredo Diaz, of Achievement Hunter. For Alfredo, of Sugar Pine 7, see Alfredo.

Alfredo is currently the Head of Streaming at Achievement Hunter. He is often referred to as "Fredo", or "Fredy".

Alfredo was born and raised in San Francisco, California.

From 2012 to 2015, Alfredo worked for IGN as an associate producer, alongside members of Kinda Funny, particularly Tim Gettys, whom he had been friends with since high school.

In February 2015, Alfredo left IGN to pursue a career streaming on Twitch.

He currently works as Achievement Hunter's head of streaming and as on screen talent. Prior to October 2019, he was also an editor.[3]

Alfredo was a contestant on Hardcore Minigolf, both seasons of Hardcore Tabletop, appeared in 7 Wonderings, and served as the main focus of a series called A Good Omen. He currently co-hosts the Red Web podcast alongside Trevor. [4]

Alfredo has been in a relationship with fellow Twitch streamer Jackie Butler since May 1, 2015. 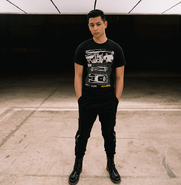 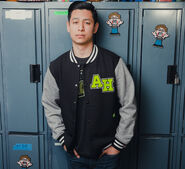