Jack and Geoff bring you the latest achievement updates in the Achievement Hunter Weekly Update!

AHWU changed greatly over the years. They started getting assorted weapons for a while (to the extent that it was jokingly referred to as the Achievement Hunter Weapon Unboxing). Most of them have been removed, but there are still a ton of knives, swords, and other dangerous items in the office.

That toned down after a while, but a new craze began of assorted bouncy balls being sent in, with the most popular being the Moon Balls (of which AH eventually got a custom set made). They occasionally scream out "Moon Ball!" (or something similar if they throw a different ball) and throw it at the big wall where the whiteboard is, bouncing it back into the room, which has previously damaged equipment.

The show opens with a 5-10 second clip introducing the show that is created by a different member of the RT community each week. The content of this clip varies from week to week and may be 3D computer animation, a song, or clips from previous AHWUs.

The show then has someone proclaim what the episode number of the show is. Originally, this was announced by a member of the RT staff or famous members of the gaming community, but recently this has shifted to members of the RT community sending in clips of themselves saying the number in notable locations, such as on the Great Wall of China or in front of Old Faithful.

While Jack and Geoff are hosting, producing, filming and starring in the show as main news anchors standing at the very front of the room (closest to the camera), other members of Achievement Hunter also appear in the background, horsing around and pulling pranks on Geoff and Jack.

Formerly, Geoff gave a brief rundown of any new games and DLC packs coming out that would add new achievements. During this segment, Geoff chose an "Achievement of the Week," one achievement coming out that week that he found particularly notable. For the second half of the video, Jack discussed notable news in the gaming world as well as his opinions on the news. The final section included Geoff announcing the "video of the week," which was usually a Let's Play that was aired that week. The episodes then closed with several fan-submitted videos filmed for AHWU.

In AHWU #358, Jack announced changes to AHWU's format due to weak viewership. It was announced that only the release of the most significant games would be read and that the show would primarily involve unboxing the gifts, toys and fan mail that fans send to the new AHWU PO box. Although it was not formally announced, this also began the phasing out of the Achievement of the Week.

Due to uncontrollable amounts of gifts being sent to be opened during the show and not enough time to open them all during the show, Achievement Hunter began doing periodical AHWU unboxing streams on May 17, 2017. These streams last up to several hours each.

As of January 2019, AHWU's show format has little to no news and most episodes are much more focused on fan unboxings, the AH guys unboxing fan gifts, fan toys and reading fan mail as well as toying around with these fan gifts and toys, pulling pranks and just dicking and horsing around, making a mess in the AH office. The first 2 minutes of an episode/video briefly features the most important upcoming news events before shifting over to unboxing and toying with the gifts as the camera pans around the room, instead of only pointing/focusing on one specific area of the room as it did formerly.

Team Lads Action News is what usually happened to AHWU when Jack wasn't present. Michael Jones, Gavin Free, and Ray Narvaez, Jr. took the camera and microphone and ran around the Rooster Teeth office, asking about what's going on and just generally annoying people. Team Lads Action News normally visited Lindsay and Ryan, along with going upstairs to check on the store. They also visited several other places at the RT office.

In AHWU #195, Gavin apparently chloroformed Jack to get TLAN running for the day. In the same episode, JJ, Blaine, and others created a barricade with their chairs to prevent the lads from escaping, although the lads easily managed to get through it.

In AHWU #260, Ray announced his departure from Achievement Hunter, leaving in order to become a full-time Twitch live streamer. He said that he would continue to show up in Achievement Hunter and Rooster Teeth's YouTube videos from time to time, continue fully portraying his character X-Ray in the show X-Ray and Vav and still attend RTX 2015. This would be his last appearance in AHWU.

As of AHWU #282,[2] TLAN appears to have been replaced with Dynamite News, starring Gavin Free and Michael Jones following the departure of Ray from Achievement Hunter. 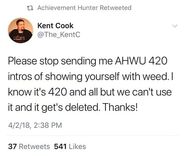