Achievement Haunter is a FIRST only series created by Achievement Hunter.  The premise of which can be paralleled to an old TV show called "Celebrity Paranormal Project".  The difference being that the pro-gamers the company are the ones doing the investigating of the haunted locals instead of random celebrities.

The pilot episode, Yorktown Memorial Hospital, premiered on May 17, 2018 as part of Rooster Teeth's Pilot Month. The test episode was successful and the series was green-lit for a first season, which aired on October 31, 2018. [1] [2] While the show was originally given an eight episode season, one was bumped to season two and replaced with an hour long cast recap.[3]

At RTX 2019 it was revealed that the title was being shortened to Haunter, and that Trevor was joining the cast in season two. [4] A trailer was released on December 25,2019 which announced that the second season was premiering on January 30, 2020. [5] 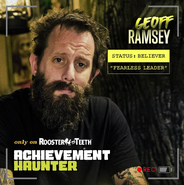 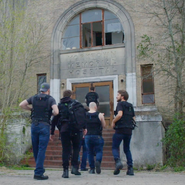